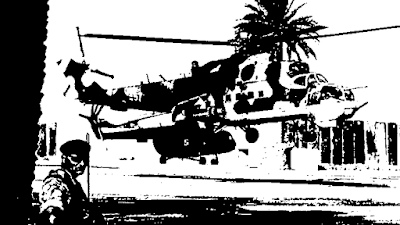 OK, so its nearly March and what have I been up to? Well, I have a couple of irons in the fire for this year but don't yet have a timescale so I have been a bit reluctant to get stuck into anything big until I know what the plans are. It is quite exciting and I want to be in a position to crack on with it once I get the green light.

In the meantime, work continues on GZ. I have a long term phobia about aircraft canopies. I get glue on them, muck up painting the frames and generally am not happy with them. Having procured a nice 1/100 Zvezda Hind I decided to follow the style set by Tim Gow over on Megablitz and More. As evidenced by his Sea Hawk model, Tim paints canopies with aplomb so...... 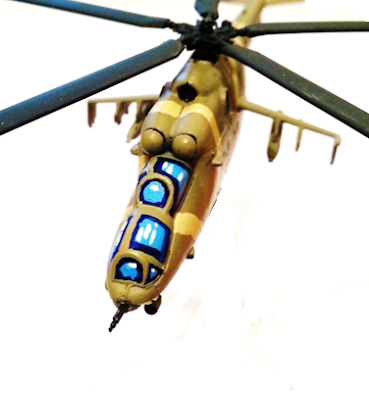 Not yet wholly finished but I'm very happy with it. By the way, I have crawled around inside a Hind at Coventry Air Museum on cockpit day. I'm only average in size but I could hardly fit in the pilot's seat, let alone the gunner's position. Even the rear troop compartment was far too small for me. WW3 in Europe would have been a walkover for NATO as they would only be fighting very small Russians!

The key thing is that now I have a helicopter I can finally finish the air rules for GZ.

There are a couple of other things on my radar at the moment:

Up the Blue: I have been following developments on Alex's blog over recent months and his development of WW2 and modern tank rules for OHW style games. His latest battle report is here. Duc de Gobin has been busy play testing the rules (here). Duc has put me in touch with Alex and I'm looking forward to having a go myself in the near future!

October Hammer: Another masterpiece from Nordic Weasel. For a mere $5.99 (that is less than five pre-Brexit pounds) you get 40+ pages of rules including a campaign system and 15 pre-canned armies. Very nice. This will be the subject of a more detailed post shortly.

I haven't blogged for a while, mainly due to work but, having done this post I'm feeling back on track!
Posted by Old Trousers at 20:44

Hi Jay, I visited Alex's blog and like seeing the vehicle platoons being represented by three vehicles, visually that looks right. I have never understood why the author (Neil Thomas) suggested a single 1/72 scale vehicle to represent the unit, it just looks odd toting a bunch of hits behind it until it gets to the magical 15 hits and never being able to be taken out by a single shot.

The Hind is looking good, apparently just the fumes from super-glue is enough to fog a canopy ... though that doesn't explain how I get fingerprints in the dried glue :-)

I think Alex's rules are pretty good and make a lot of sense. I'm looking forward to seeing how they work in practice.

The Hind is now nearly done, just a bit of touching up. Finger prints all over it (!), I think its old age, my hands aren't very steady.

Good to see GZ developing - I haven't got as many games with it as I would have preferred - but having been reading the old Vietnam 'Headhunters' books in preparation for the Vietnam episodes. Great that you got a copy of Alex's UTB - will be good to experiment with these.

...and yes, I always get bloody glue on the canopies too...

Thanks Duc. GZ may be a runner for a published game at some point, would appreciate help on play testing in due course. UTB also looks good, lots packed into a small space!