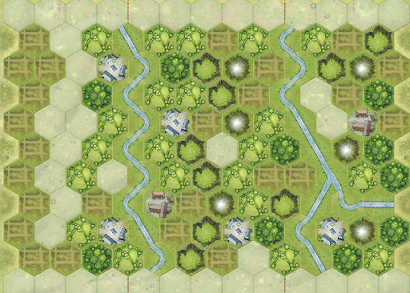 While dealing with Covid 19 issues and preparing for the Brexit Omnishambles at work, I have been quietly getting on with Stout Hearts. It is going well, fingers crossed! Here is the current map, on the M44 editor, my preferred design tool. This will be a simple game but simple games are hard to design.

I am very pleased therefore that Disgruntled Fusilier at Sound Officers Call has been running a series of tests on simple games and evaluating them against standard criteria. The latest tests have been of DF's own EAGLES CHEAPER THAN BRAIN CELLS.

What has really interested me is the AARs. You can tell from the way the games have played that there are some really interesting features here. I have been really impressed with the way that the rules produce a cracking back and forth battle for control of terrain as seen here.

It is rare that I get excited about stuff but, as with some of the rules produced by Norm and Peter, I think DF has got something special. Key features are:

The reason for my excitement is that this fits really well with OHW and has loads of options, including the influence of the general on orders and initiative.

I'm still mulling over the other interesting features of the rules including the firing and assault rules. Lots to consider here and, judging by the AARs, these rules produce a great game. I'm looking forward to the rest of the series.