Battle of the magazines?

But not as we know it!

I have been very busy painting, which is unusual for me, hence my lack of writing. I am a very slow painter and am just finishing up my WSS Bavarians and British. More of these shortly. As a bit of a break I have gathered up this months magazines (the usual suspects plus a special guest) and had a read. My comparison of these magazines, as usual, is both partial and random. My chief requirement from them is that they provide some inspiration. At this time of year I am feeling sluggish and tired so I really need some zip. Did I get any? Well, lets see what caught my eye..... 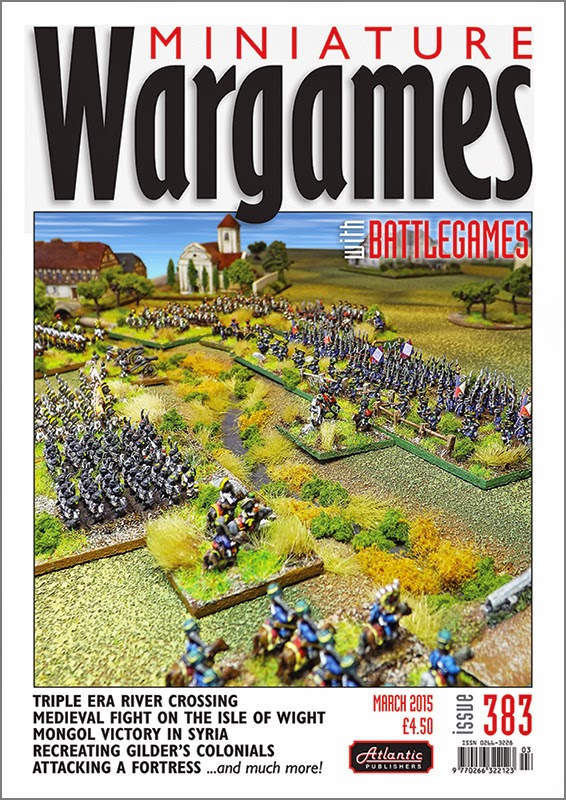 Interesting things for me are that WMMS is on in a couple of weeks time so this year I must make an effort to go along. I also see that the MK show is on again in May. It was cancelled last year as it wasn't appropriate for the venue but its back now in the same place. Que?

Nice to see The Great War getting some full scale advertising. Also nice to see the reviews section loosening up and covering books, rules and boardgames. One of the reviews caught my eye. I have mentioned Berserker Games before. I'm interested because they major in solitaire games and I'm on the look out for ideas. Operation Afghanistan, a solitaire Soviet era COIN game, is given a good write up. Nice one. I have therefore invested in Crowning Mercy, an ECW campaign, I'll report back on what I find.


The main article of interest to me is Steve Jones' Command Challenge, Paddling in the Piave. This provides scenarios for Napoleonic, AWI and Ancient eras and is an interesting follow-up to his article last month on the 1809 Danube Campaign which I am still pondering. 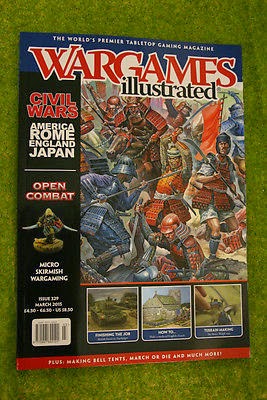 Well, if you like FoW you'l like this one! Their new painting guide look very good but it looks like they will only be referencing their own paints. Also, the late war British plastics look excellent, however, at nearly £30 for 144, they'll have to be brilliant to be a better proposition than the PSC ones. The one interesting article is a translation from a very old Vae Victis of a Bruce Weigle tutorial on making 6mm terrain. Nice houses is all I can say....some lessons for me for a later date!

So, deep snooze mode, will next month be better?

One of my favourites even if it is just for the quality and smell of the paper! 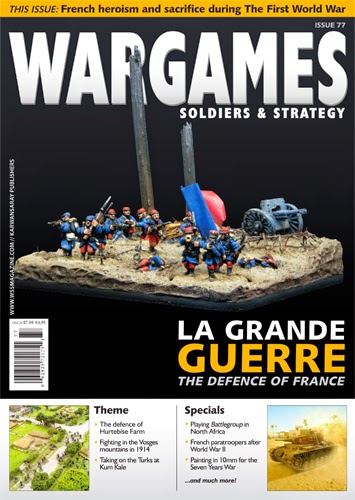 A lot of modelling articles this month and French WW1 stuff. Most interesting item so far is a scenario for the Battle of Jemmingen 1568. This features Spanish tercios and Dutch rebels.

So, this just reaches the stimulation threshold but I'll deliver a final verdict when I have spent some time with it.

Yes, its free. A small e-magazine devoted to very small games. The latest edition is now out and can be found on the Panzer 8 Yahoo Group. The main articles are:

This e-zine is put together by SamACW and its an entertaining read. The Solferino scenario is designed for Rifle and Musket which is a two page rules set which contains one pages of rules and one of army lists!. Many things to ponder, especially when added to Steve Jones' Miniature Wargames articles.

I'm looking forward to the next one (Spring) which may well include:
This passes my stimulation test with ease.

Now, back to those little chaps, time to find a flag or two!

Posted by Old Trousers at 20:18 No comments:

Well, things seem pretty brisk in the world of wargaming at the moment and it looks like being a bumper year. Starting with: 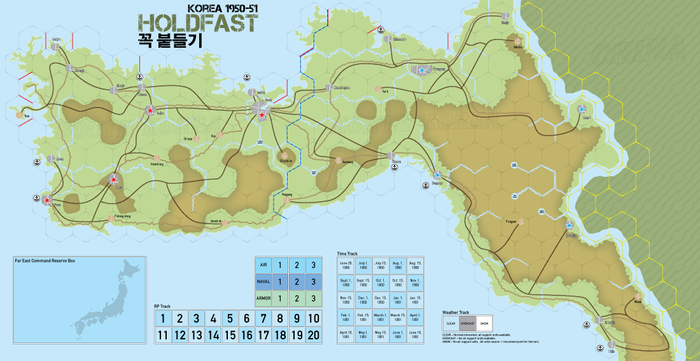 The Kickstarter for Holdfast Korea is going well. Although sorely tempted I will attempt to hold on to my pennies because Grant Wylie says in his latest newsletter:


"Prior to designing Holdfast Korea, I was working on the design for Holdfast Bulge 1944.  Some of the other titles that have been floated are Vietnam, various Pacific battles, Market Garden, and of course we couldn’t leave Rommel out with North Africa."

I'm not sure about using Kickstarter as a pre-order device but if it gets more games like this to market then I'm a fan. 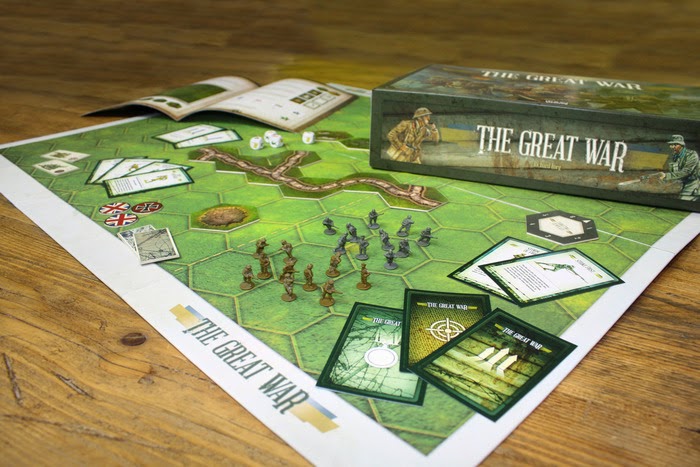 The other big news this week is The Great War, a Command and Colours WW1 game by Richard Borg and The Plastic Soldier Co. Fantastic. I have signed up for this. It is a traditional CnC game from all accounts and will have a double sided map board (grass/mud) slightly larger than the usual (12 across by 11 deep). I like the scope of the proposed expansions:


"In this core game, the main focus is on a number of WWI trench warfare battles. However, a series of expansions, which will feature early war, Eastern Front scenarios, tanks, airplanes, other national armies, plus more special personnel figures, are already in the planning stage to enhance your WWI gaming experience."

Sounds good, if not quite expensive in the long run. Having said that, one Battlefront army (faction I suppose) for their WW1 game is £65 alone so really this game will be a bargain (I tell myself).

So if this wasn't enough, here is some more good news: 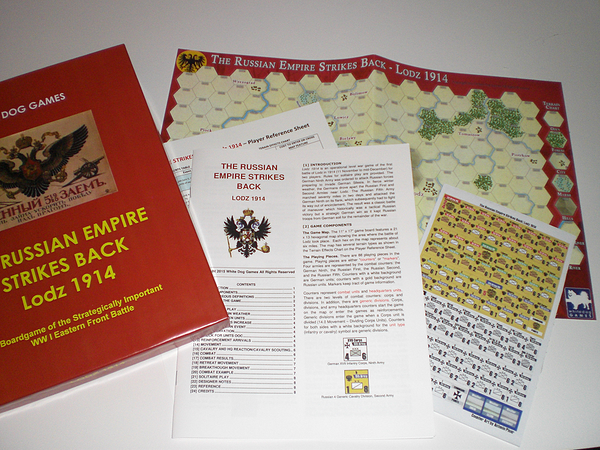 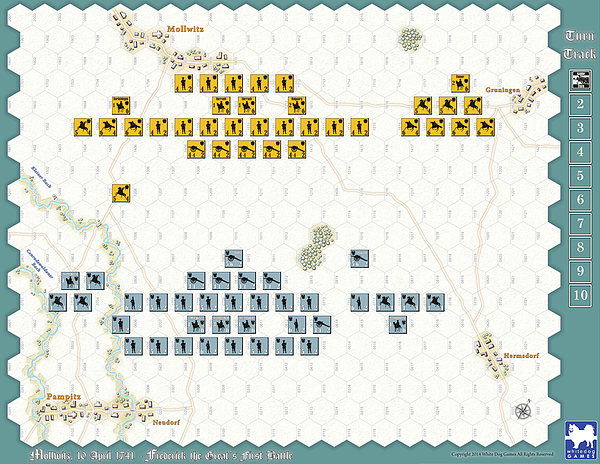 The good news is that they do print and play versions of their games for $18, saving on postage and import taxes. With Hold the Line: Frederick's War looking very much unobtainable at the moment (oh dear!), Mollwitz might fill a little of the gap.

I have joined in this latest support drive as usual. Consim World is one of my constant companions (yes, very sad). This year's goodies are:

A job well done by everybody. Thinking of HFDG, they have an interesting but very small game out for less than $6 on the German drive to Astrakhan in 1942 (Greyhound vs Bear). This will be worth a spin. 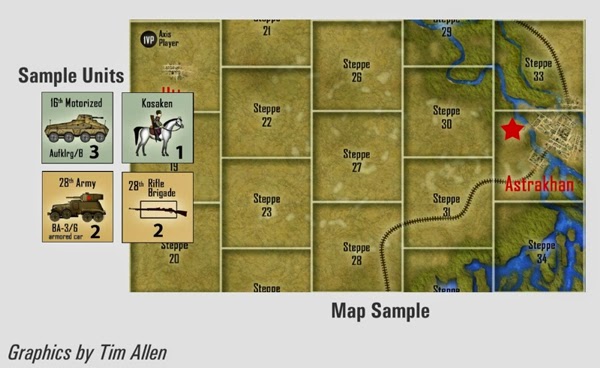 Blucher is now out and happily costs less than £30 from North Star for the rule book. PBI III is also out. While Blucher is very very tempting, I just can't afford to get into PBI which seems to be different in many respects from its predecessors (both of which I own). Maybe I'll just wait for the reviews before making a decision.

I have paid a visit to Wargames Vault recently. There are two things on the list for consideration: 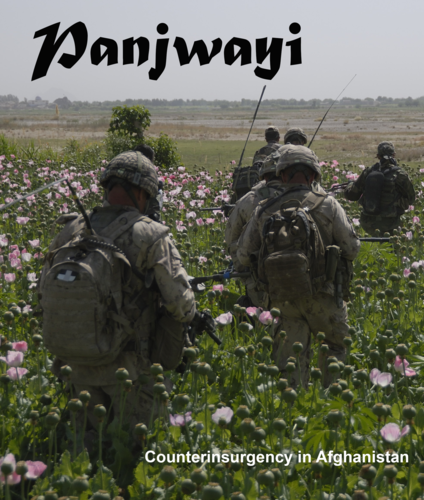 And one very last thing, a little One-Hour Wargames rules set for WW2 called Hot Chow. Having just finished E B Sledge's "With the Old Breed", I can verify that "hot chow" features regularly through a US soldiers service.
Posted by Old Trousers at 18:19 No comments:

I have finished my two Dutch units from my painting experiment and I am very pleased with the result. In the end, the different painting techniques made little difference in this scale and, probably, increased the amount of time taken to complete them. I'll keep it simple next time!

I have finished them off with gloss varnish and some flags from Warflag. The units represent the Ostfriesland Battalion (front) and the Salisch Battalion (rear). I like the toy soldier type look that the gloss gives. This will fit well with my wooden scenery.

I have also made a lot of progress with my latest hex grid version of the One-Hour Wargames rules by Neil Thomas. This time its a version of his Horse and Musket rules for the Spanish Succession. What is really good about these rules is that they require so few troops, being a slow painter isn't a problem!

Like all of my rules and variants, I regard these as being at play test stage. Doing sums, drawing diagrams, rolling dice and pushing bits of cardboard around is great but its only when other people have a crack that you know whether or not they work. You can find the draft here. if you give them a try, let me know how it went.

Yes, I've done my best with my limited painting skills and have come to a number of conclusions, none of them surprising.

The original plan was to test alternative approaches to painting my Baccus 6mm WSS chaps. These guys will be Dutch in grey coats. Here on the left we see one infantry unit undercoated black but with a white dry brush to bring out the highlights. On the right we have a white undercoat with a black wash to produce both some depth and also to generate the overall grey colour. 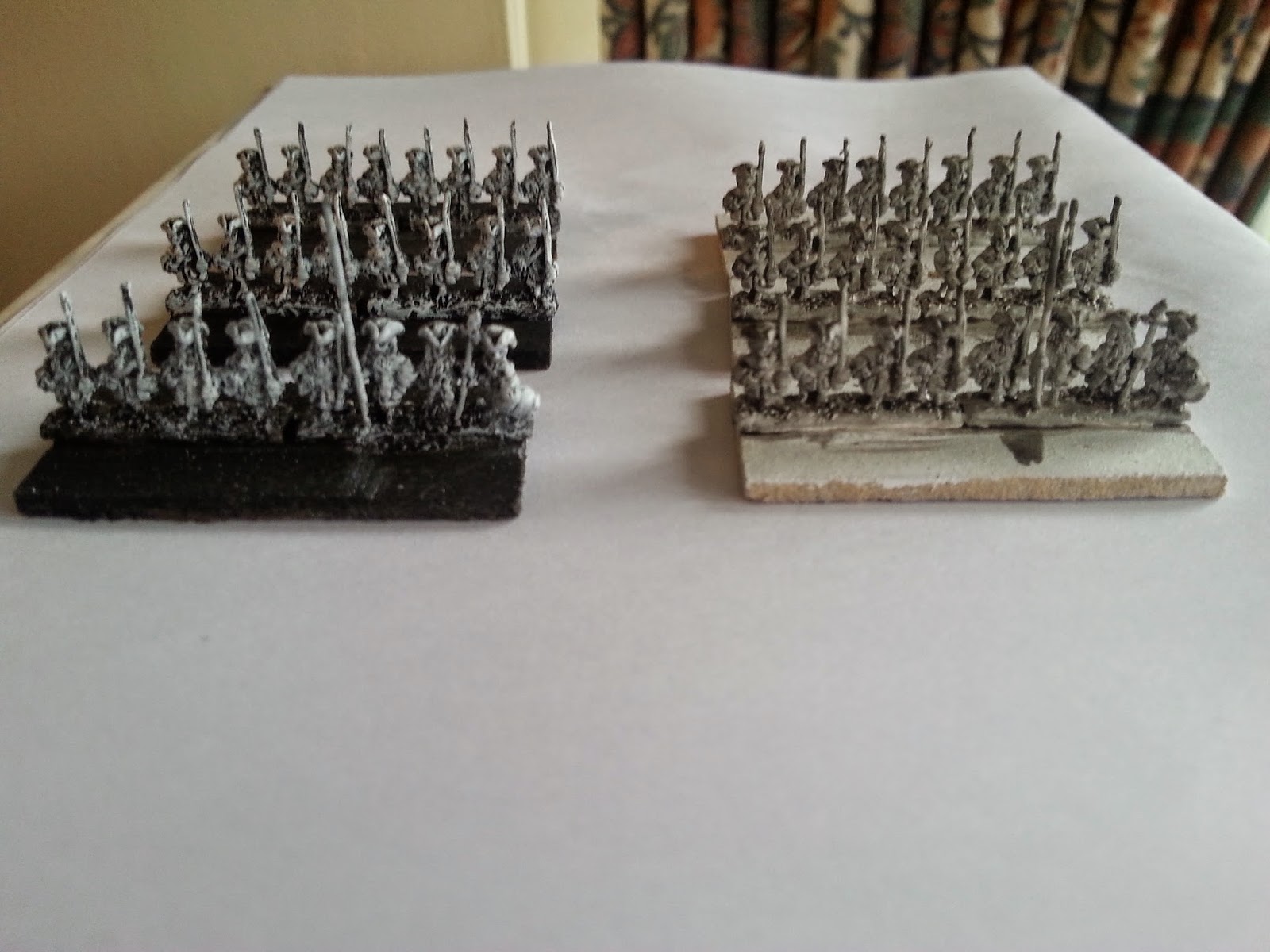 My initial thoughts are that the black undercoat (Chaos Black spray) was easy, the white dry brushing was extra work and made the figures look untidy to start with. I don't think the white did anything to bring out the later colours and in fact, prevented me from ensuring some nice clean black lines around the block painting. I also had to paint the hats!

The white undercoat was a pig (Rustoleum Acrylic White spray). I had to re-coat in Vallejo white which looked fantastic. The black wash (GW Nuln Oil) produced a nice grey colour but without adding much depth. The effect was very pleasant but, on such small figures, doesn't stand out. I may use this for 20mm Austrians where it may prove more useful. I also had to paint the hats!

So here we are with nearly completed figures, white undercoat on the left and black on the right. They look very similar to me but I prefer the black simply because they have a bit more definition. In fact, my conclusion is that the next lot I do will be a simple black spray undercoat followed by block painting and that will be that. Less bother for same or better result. 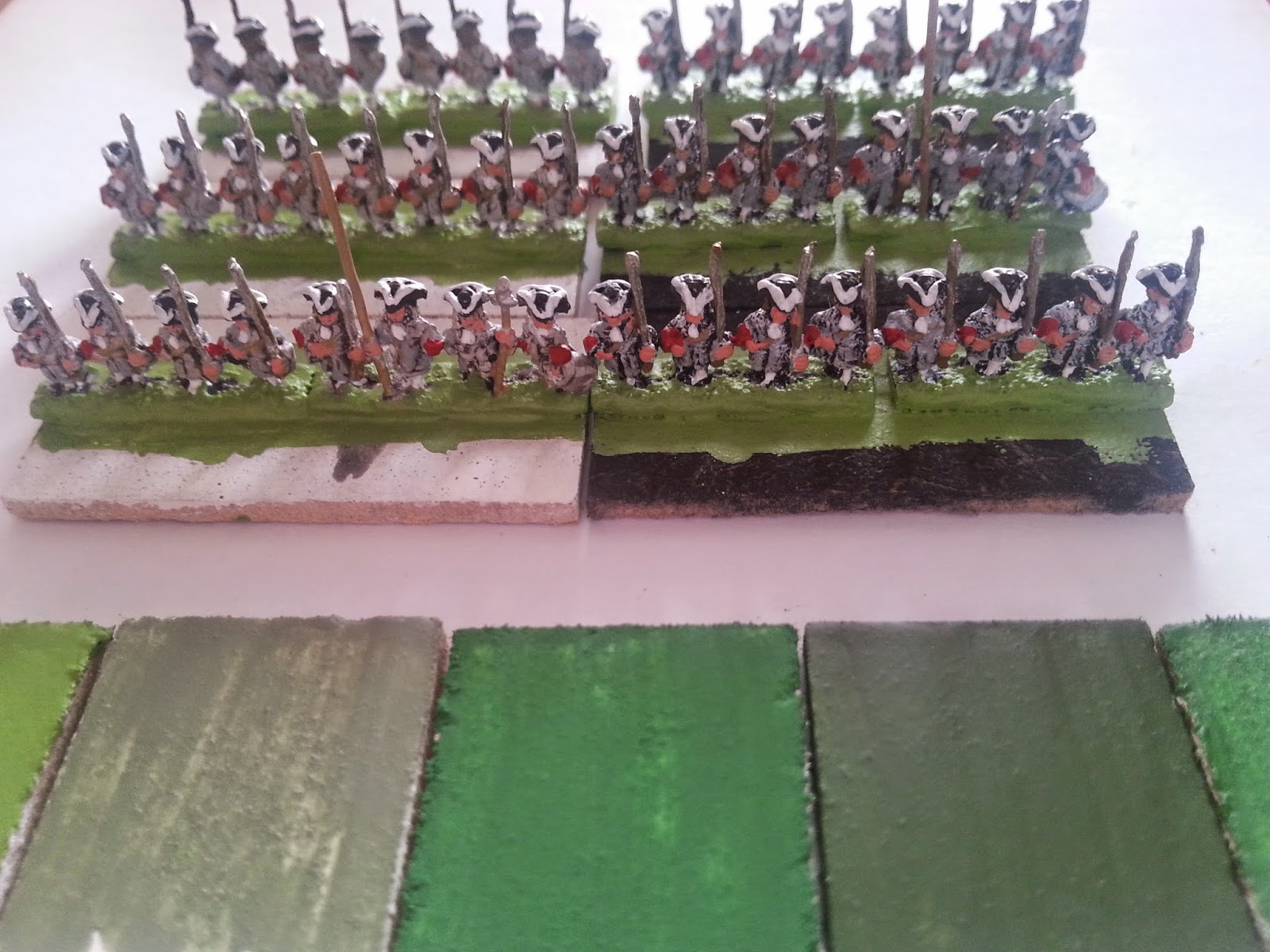 So what is with the green? I made a mistake basing my Bavarian by using a too dark green (Dark Angels Green in fact). A great colour but it simply doesn't bring out the best of the figures. Here we have from the right: GW Warboss Green, GW Loren Forest, Crafter's Acrylic Pine Needle, Homebase Sage Leaf and Habitat Leaf. These are: too blue, too dark, too blue, too brown and just right! The Habitat Leaf comes in a 125ml tester and should last for some time (great for £3.50). It covers well and, although a bit thick, is easy to work with. This is for me the right colour of spring grass and will now be used on all of my bases, probably without any extra vegetables. 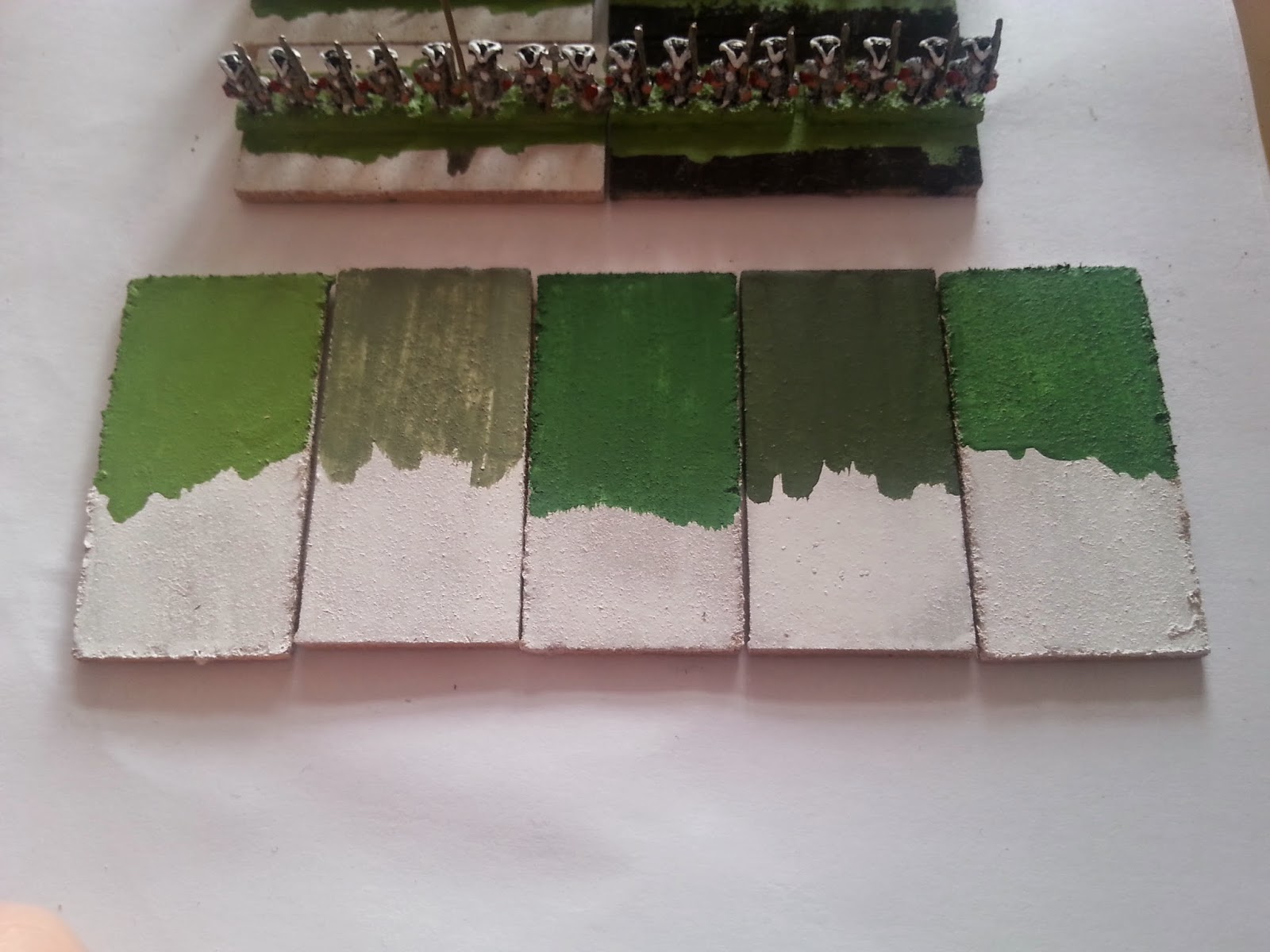 So, job done? Yes. And what's more, I really enjoyed the painting, so much that I have bought new brushes!
Posted by Old Trousers at 16:43 No comments: