Well, I have made a start. I have finished the play test counters and these have been posted on the DE page. I have even put the counters on the board, or at least the NSyA. 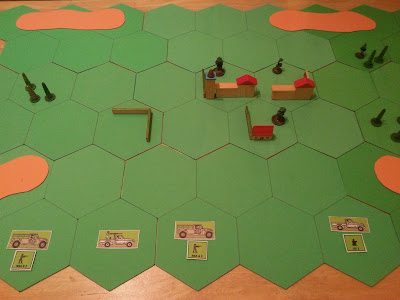 I'm surprised how nice the counters look and how normal it feels to have 3D scenery and 2D counters.

I have yet to cut out the OPFOR counters and will do so during the week. I'm still working on the values for the various characteristics. I'm also pondering whether the Jordanian Special Forces, who I know to have night vision equipment, should move faster at night and if so, how much?

Coming to post this I realise two things, firstly this is my 200th post. A notable event and worth a beer or two tonight! Also, I haven't posted much recently on all of my other projects and interests. I'm sure I will return to these in due course. One precursor of a change in tack is my scouring of the net for interesting stuff. Just so you know, there is a huge bundle of FiveCore rules and supplements on Wargames Vault for "pay what you want". This includes the original versions of FiveCore Skirmish and Five Men in Normandy. Well worth a look.

SIGINT confirms that 4 NSyA prisoners are held in compounds at al-Susah, in Syria north of al-Bakamal but across the Euphrates and close to the Iraq border.
SIGINT suggests that they are held up because of Coalition air interdiction. They are waiting for a quiet moment to slip over the border to Qaim where they will be executed on live TV.

ISIS are believed to have one SF team in close protection of the prisoners with support in platoon strength with heavy weapons and sniper team. They are deployed to the west of the target area suspecting action by NSyA from the Syrian side of the border.

One Jordanian SF team from 71 Counter Terrorism Bn plus 2 NSyA teams and one heavy weapons support. These are in-bound from Iraq guided by the Desert Falcons, Sunni fighters from al-Waleed, so are coming from opposite direction expected by ISIS.

All is calm at Dark o'clock...

Remember, this is a game, its not real so no-one needs to bomb anything anywhere near al-Susah, that goes for the Russians too!
Posted by Old Trousers at 21:16 No comments:

I have just prepared my non-wobbly counters for some play testing which may occur tomorrow if all other jobs are completed in good time. The counters are looking quite nice... 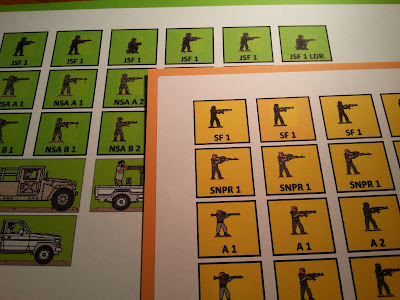 I have realised that I haven't put beards on the guys driving the NSyA's trucks. Nevermind, they must be Americans! 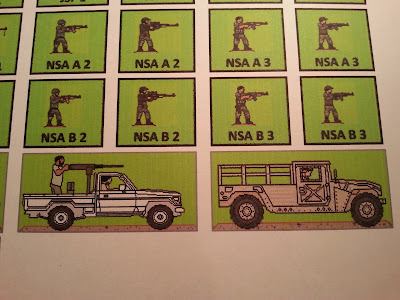 Next job is some 3D card houses and some 2D palm trees.
Posted by Old Trousers at 20:38 2 comments:

Just a couple of pictures of the counters as they develop. These are for the DE1 Scenario: Al-Bakamal Rescue Mission. 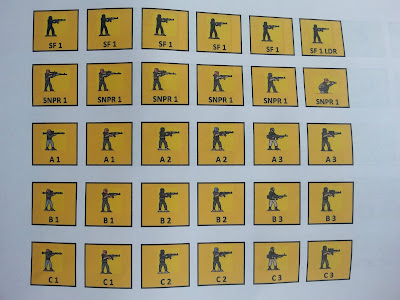 ISIS counters with SF team, sniper team and three squads in this sheet. All units are six counters, the 12 SP squads have counters with a value of 1, 2 or 3 so you can "make change" as they say in the US! Printed on flimsy paper so a bit wobbly for taking pictures. 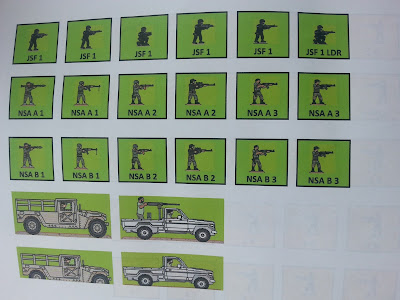 I'm pleased with the results. Much cannibalisation of Junior general images involved in this. Grateful thanks and credits will be posted when I have finished them. Testing not far off....
Posted by Old Trousers at 19:42 1 comment:


I can't say that I have loads of toys and the ones that I do have are not quite suitable for this sort of game. So this requires improvised counters. First ones.....ISIS special forces team.

More to come. Also, as promised, the revised NSA army list is now on the DE page.
Posted by Old Trousers at 20:37 2 comments: 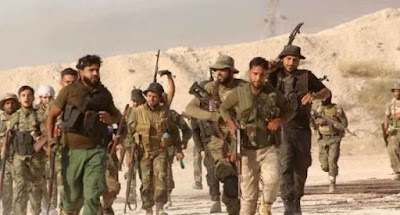 This scenario is based on Scenario B of Lion Rampant, Defending the Indefensible. In this scenario, ISIS have placed four NSA prisoners from the al-Bakamal attack under guard at a location near to the Iraqi border. These prisoners will shortly be moved into Iraq. ISIS have set a defensive perimeter assuming any attack will come from Syria.

NSA plan to attack the ISIS position to retrieve their men and demonstrate they are not a busted flush. The Jordanians have provided a team from their Special Forces (Counter Terrorism Battalion 71) to assist. Aided by satellite navigation and communications plus drone data and SIGINT, the NSA force is able to approach the target area from an unexpected direction (Iraq). 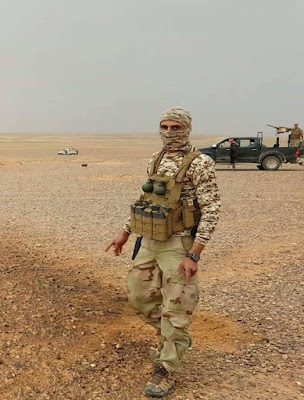 The Thuraya is a sat phone, possibly a "summoner" type characteristic (or maybe just for phoning the chopper to airlift the rescued prisoners).

Don't take any of the above for granted, I'm just playing with the points values for now!

I'm still thinking about these. In the Middle East great store is set by ghanima, the spoils of war. This is demonstrated by the counting, filming and Facebooking of captured weapons, vehicles and people. Ghanima must be a big factor. As this is also an information war, we need to address "glory" and "boasts".

My other issue is improvising enough stuff to be able to give it a go. Fingers crossed!

I'm in the process of updating my NSA army list as more information comes to light. The situation is extremely dynamic and clearly shows that something is going on driven by the big players (US and Russia). I'll put the updated version out tomorrow.
Posted by Old Trousers at 20:35 No comments:

Well, I have put up a new page for Desert Eagle (DE) and posted a revised version of the NSA army list. This is still a work in progress. 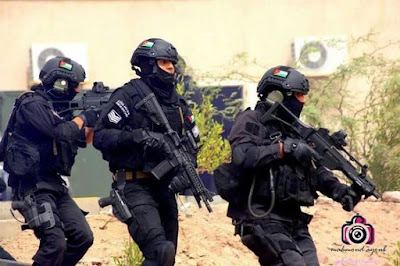 I'm now working on the first scenario. This will pit the NSA against ISIS in a (fictional) attempt to rescue NSA prisoners from ISIS following the al-Bakamal disaster. In this scenario, based on Scenario B: Defending the Indefensible from Lion Rampant, the NSA return with Jordanian Special Forces (Counter Terrorism Battalion 71) to get their men back.

I am really excited about this. You will now see some massive improvisation from me so I can get this thing play tested. Highly likely to involve a lot of cardboard!
Posted by Old Trousers at 20:49 No comments:

It has been really busy recently with work and summer child care activities. In my spare time (having fixed the fence, the washing line, front door etc etc), I have been pottering with Desert Eagle.

Following my last post, I figured that I needed to work out troop types and special rules using some real world examples. I'm not sure why I started with the New Syrian Army (NSA), possibly because they are current news, also perhaps because they are small and self-contained as well as being quite a good model for other factions. I have had a go at an initial army list for the NSA, you can find it here.

I have to report something very strange. I'm 58 this year and have been studying this sort of thing for what feels like forever. I used to read Rand reports on the Vietnam war when I was a teenager. Researching the NSA brought everything back and I suddenly realised it's like 1968 all over again. Or is that 1975 and the CIA intervention in Angola? Currently I'm overcome by a very weird feeling of deja vu all over again. Bay of Pigs anyone? If Donald Trump wins how long before he gets assassinated?

Anyway, I've gone over the top on the army list, I found myself becoming more and more interested in the subject and what happened in the NSA's recent unsuccessful battle. I think there is a fundamental problem trying to design something that is currently happening in real life, its quite difficult because all the parts are moving. Nevertheless, a start has been made so lets see what happens!
Posted by Old Trousers at 21:23 1 comment: