Last weekend's plans for research were stuffed by an inordinate workload. My only respite was the rugby so its a good job England won!

Looking forward in hope to this weekend, I have just competed another round of thinking on sources for the game. Having already got both Russian and British first hand accounts I have now turned up Max Hoffman's memoir of the Eastern front.


This is entitled "The War of Lost Opportunities" and is available on line. It is a very easy read and one gets a real impression of the man behind the glasses.


Being slightly frustrated by my current sources for the narrative I have returned to Amazon and with the help of a nice gift certificate have ordered today "Tannenberg: Clash of Empires 1914" by Denis Showalter. Denis is an American historian of whom I was unaware until I recently started looking at some books on the Red Army. He has a good rep and I'm looking forward to getting into the detail. 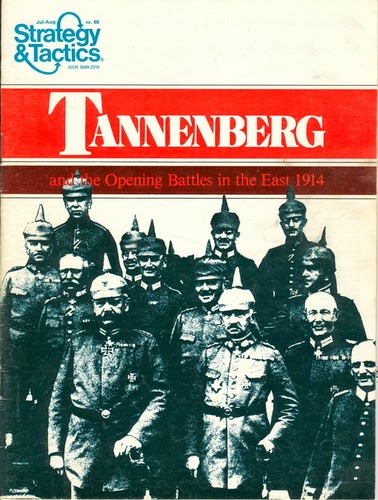 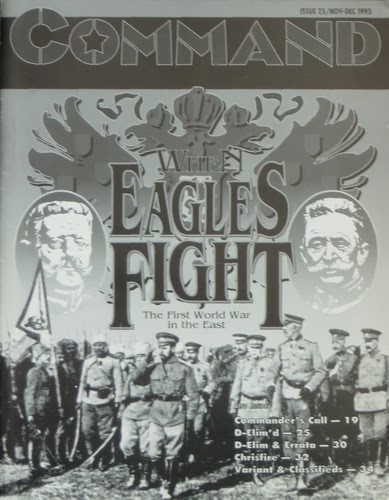 I have also taken the opportunity to look into my games boxes and have come up with both the 1978 SPI "Tannenberg" game and also "When Eagles Fight" from Command Magazine. Both bring back happy memories so I just have to resist them to get on with my design.

If I'm too tired to do anything sensible tomorrow I'll get the crayons out and play with some counter designs.

Posted by Old Trousers at 20:35 No comments:

Why do I need an electronic map when I have a trusty paper one?

Well, I will need one eventually so I can publish on this blog but my main motivation is to be able to storyboard the campaign as suggested by Phil Sabin. The scale of the map is around 15 miles per hex so two hexes will represent 3 days travel for foot mobile troops. The key dates are:

This is around 38 days which at, say three days per turn, gives 12 or so turns. Anything longer than 12 turns is likely to be beyond me. This means I'll need at least 12 maps to get a grip on the storyboard and to test out movement rates and combat duration. Ideally. the story board will be on PowerPoint so I can effectively animate the action and use standard unit icons to move around the maps. I know I can do this in PowerPoint so that is the plan.

I have never made an electronic map before. Step 1 is to get some hexes. My hex grid is predetermined by my design parameters (13 by 9) so I generated an SVG file, using an on-line programme, which I then loaded into Paint.

The rest is trial and error. Here is the map as of today. The only missing items are names and railroads. The terrain and features are pretty standard and you can probably guess most of them without difficulty. 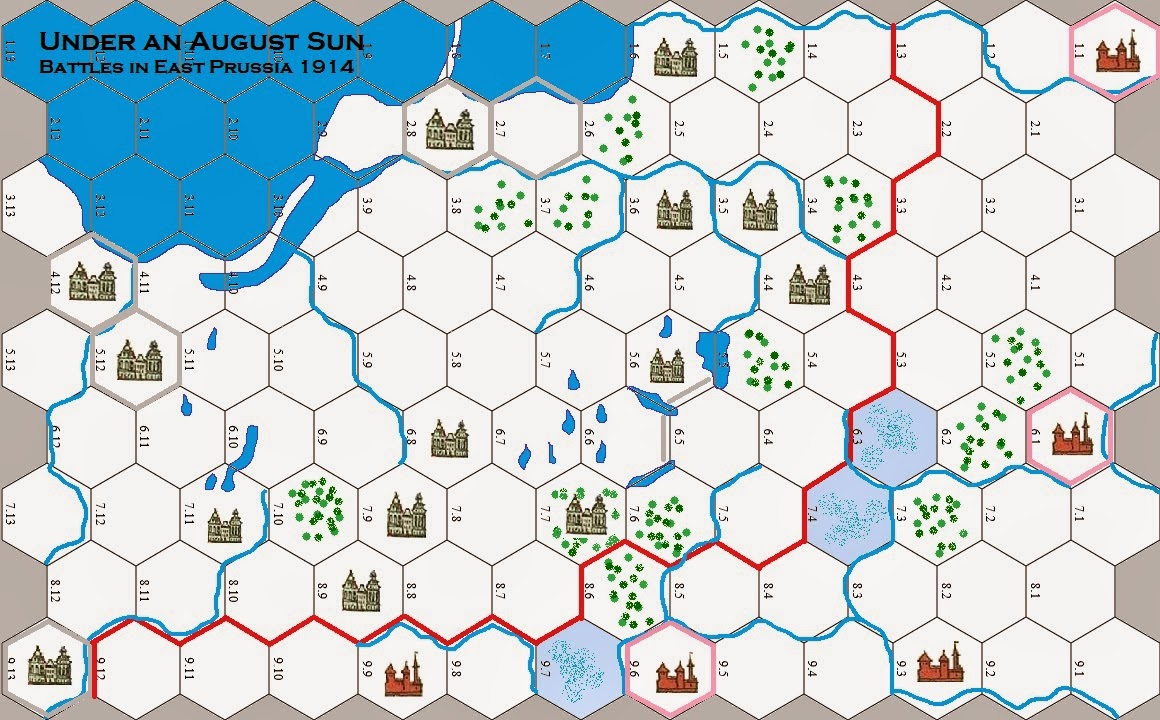 I have to say that I'm quite pleased with this so far. Now I know a few things about Paint, I can make a better job of the final version.

The town icons are interesting and this is a really cool part of the story. I'm with Redmond Simonsen in terms of what information you put on the map. It should be designed for play and should be very simple. However, I'm increasingly interested in "visualization". The things that you play with, toys, counters, maps, model terrain, should be designed to form part of the narrative of the story. This I suppose is a set designer approach and like the theatre or the movies, we should look for style and, perhaps, some necessary exaggeration. I'm not a realism junky so don't look too closely at my toy soldiers, they're painted for effect.

In mucking about on the internet I came across this hand drawn map, obviously from prussianpoland.com! 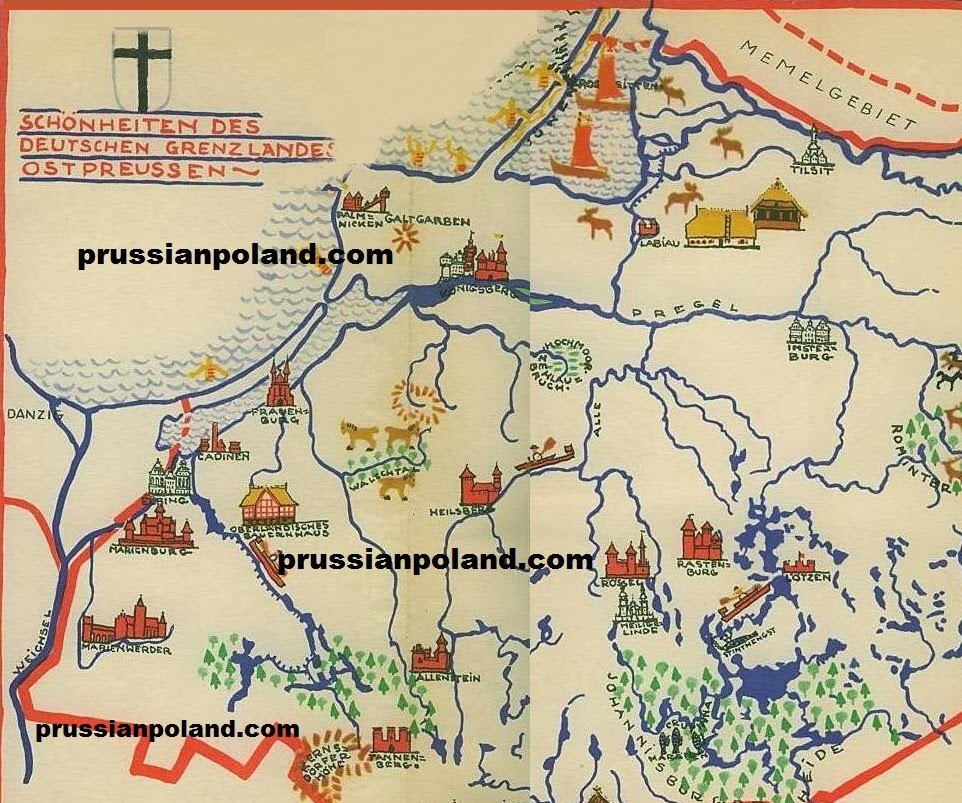 I don't know the source of this map but it looks post-Tannenberg and may well be a child's artwork. What I really like about it is the characterisation of the different towns and cities and the very nice little drawing of Fort Boyen. I have tried to use some of these little drawings in my map as it helps put the player (i.e. me) back into the early 20th century.

If I'm lucky, story-boarding at the weekend which will lead onto OB compilation.
Posted by Old Trousers at 20:13 No comments:

Pressing on with the Tannenberg game idea is great but there but I have had to make a list of other stuff that I will return to at a later date (on the glorious day that victory is achieved at Tannenberg).

A couple of new developments: 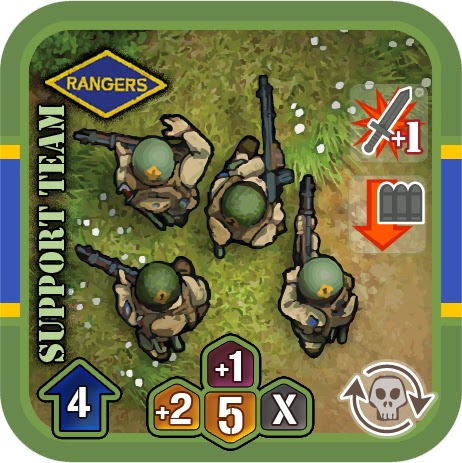 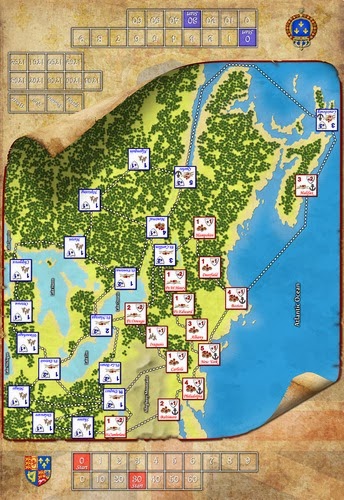 Posted by Old Trousers at 15:19 No comments:

I have had a chance today to pursue some further research into the Tannenberg project. What I hadn't appreciated fully before is the extensive use of fortifications by the Germans in the wide open spaces of the east. I was aware of Konigsburg and Danzig but was not conscious of the plethora of fortifications, armed camps and forts that existed in August 1914.


My understanding is that German fortifications were grouped into districts under a District Commander. The relevant districts in the east are:
These were not static defences. While having thick walls, heavy guns and supplies to outlast a siege, each fort had a main infantry and artillery reserve. The purpose of these reserves was to prevent the fort itself becoming invested. In wartime, fortresses in the war zone would come under the control of the appropriate Army commander. The fortresses would give up their main reserves to support that army.

For example, Thorn was a major fortified camp providing a home for the equivalent of a whole Division (35th Reserve Infantry Division). There are some 15 individual forts encircling Thorn and covering both sides of the Vistula. The garrison included:
Further details of the garrison can be found in this summary. The 35th Reserve Division was deployed with the field army on the outbreak of hostilities.

What has really spiked my interest is the presence of aviation detachments (aircraft) and Zeppelins as part of these garrisons. Posen, for example, had:
A further Zeppelin, Z-4 (Army Airship: Haupt. von Quast), was operated from Konigsburg.


Right from the off German air units, including airships, mounted reconnaissance operations as well as bombing enemy targets with improvised weapons. The two Zeppelins conducted the following raids into enemy territory.

Note that Z-5 ended its career when it was forced down by the Russians during its last attack on Mlawa.

Another thing that has got me interested is the Baltic Fortress Route. Effectively a tourist trail around the Baltic forts. Great stuff, not sure the wife will let me book it as a holiday!


Why Dystopian Wars? Well, Germans in pointy hats, airships, aircraft, armoured trains, cossacks? You can't get much more steam punk than that, even without dreadnought type ships and armoured river gunboats. Sometimes real life is richer than even the best created worlds.

Posted by Old Trousers at 19:49 No comments:

Does Googling while drinking beer count as serious research?

Well really, how else are you going to do it!

My adventures with Tannenberg continue and the research is going well.

I have prepared a test map based on the general East Prussia map in Barbara Tuchman's Guns of August. I'm doing this because I believe that all wargames should have direct links to the material that people actually read. If they encounter a game that has a map that is instantly recognisable to them it will enable them relate game play to history. 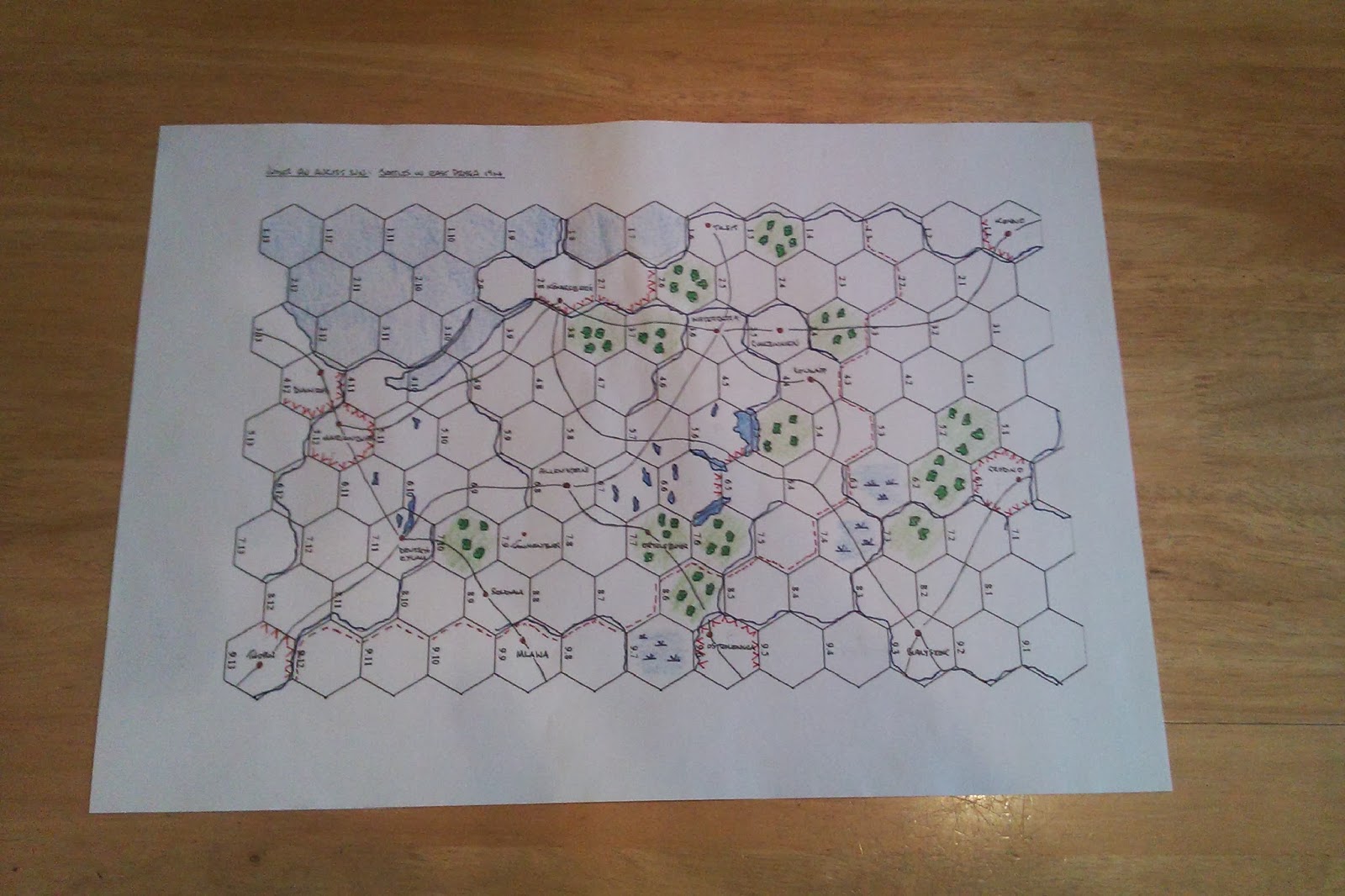 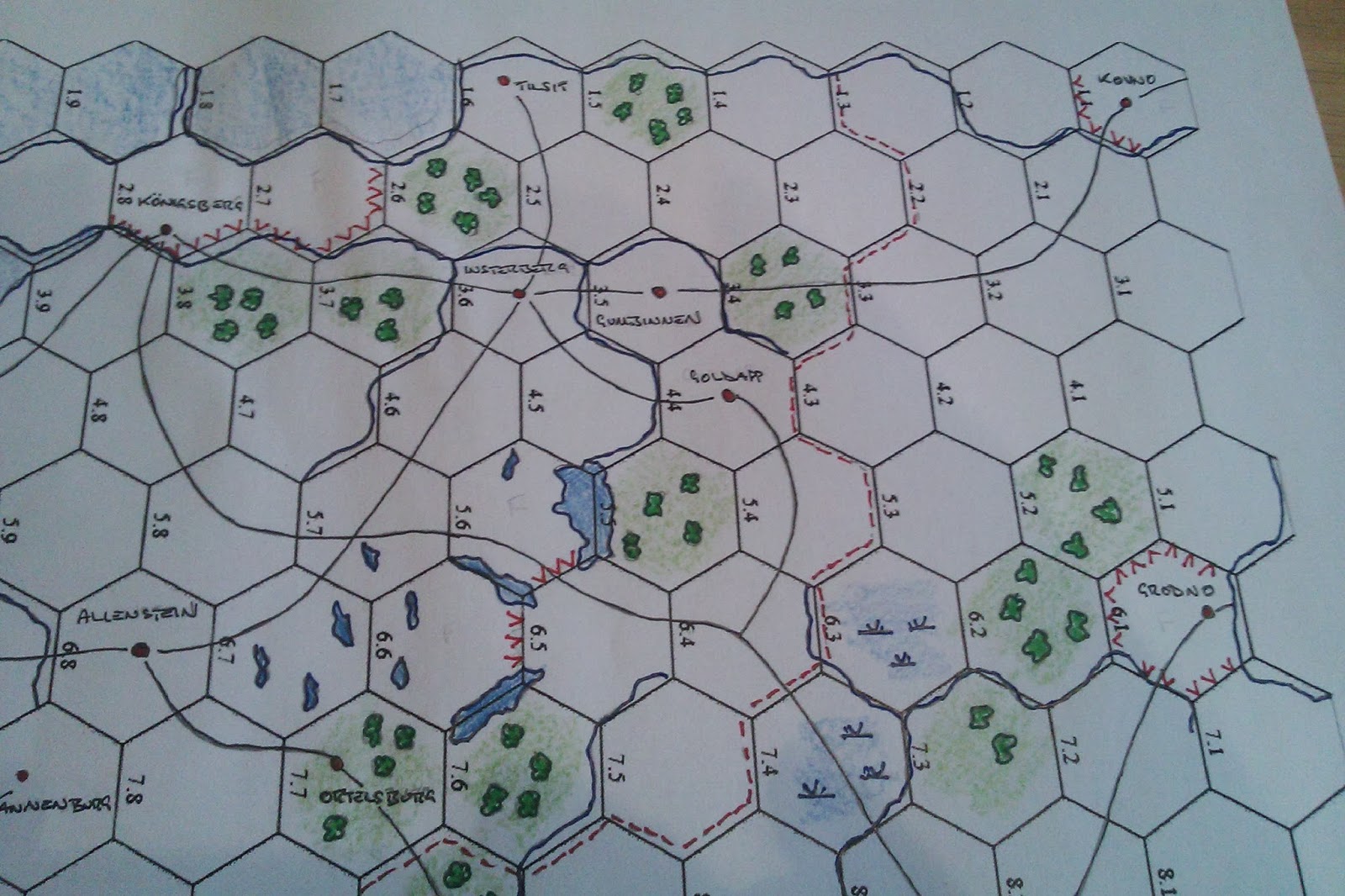 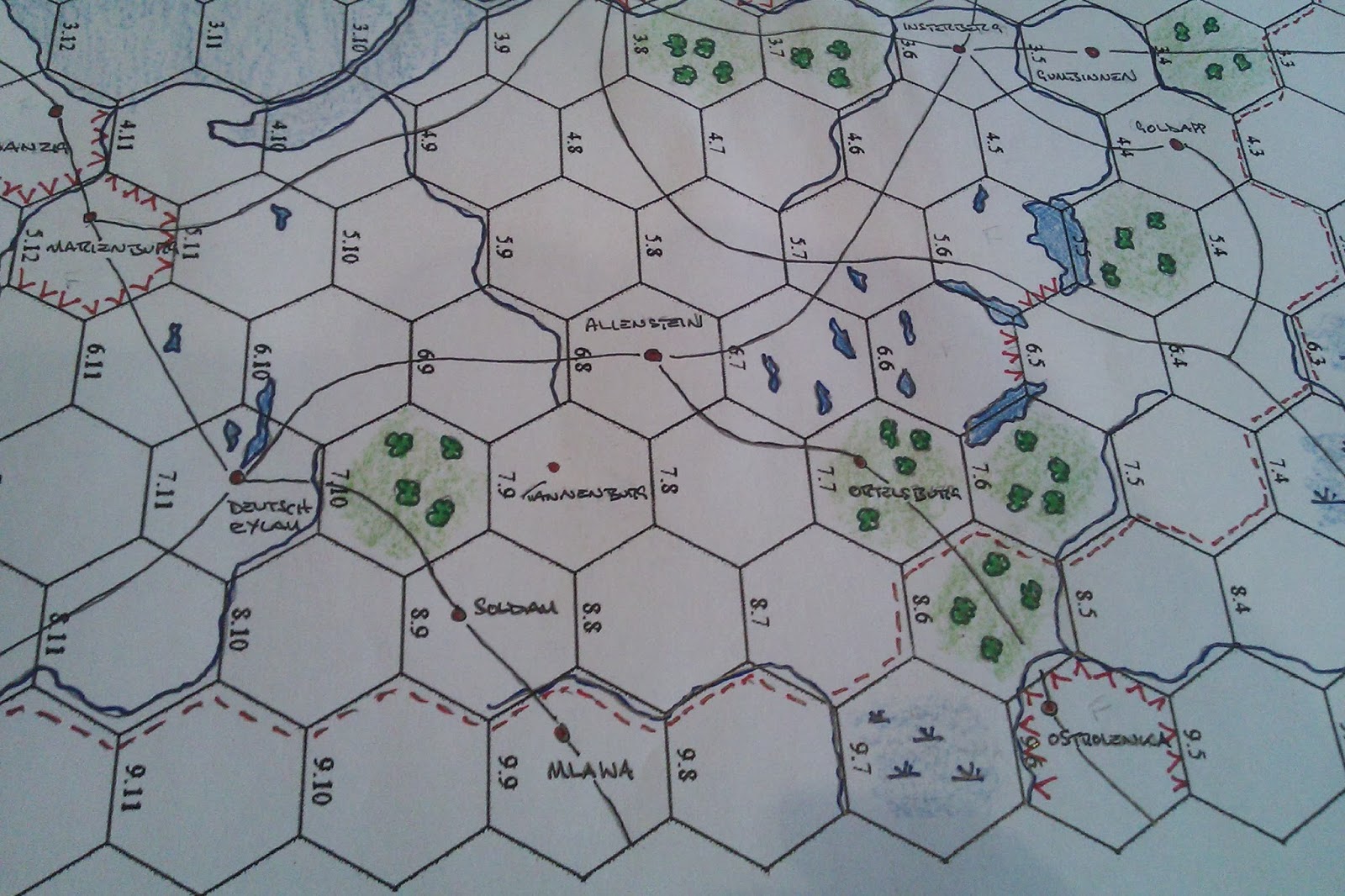 I generated a 13 by 9 hex map using an online programme that generated an svg file (whatever that might be). Being technically brilliant I printed it out, took it to the copy shop and got an A3 version made of the grid. I then used pencils and pens to make a map Simple!

Having said that, I will try to make a wholly electronic version but this will take me a while as I will actually have to learn how to create this on the computer.

Unusually, I made this map very quickly and am pretty happy with how it looks. I spent some time trying to eliminate questionable areas. My only concern is with the Masurian Lakes section where the inter-lake defences need some verification. One of the issues is with Fortress Boyen and in deciding what the fortifications on the map actually represent. More in this in a later post.

In terms of research I haven't just been Googling, tempting as that may be. I have used:

I think that if you are a casual reader of military history you will have come across the latter two books. The Databook is quite good on OBs but can be a bit limited. I have, of course, cast my net on the internet and found two brilliant references:

Both of these references are free on the web through the Internet Archive and US Command and General Staff College respectively.

On the OB front I've used the Nafziger collection. Getting the OB straight, designing the counter manifest and starting on the shape of the game is next on the list. There will as usual be a slight detour, this is around the nature of the fortresses in the east and the tactics of their use. Fortresses with Zeppelins?

I have settled on a  name for the game: "Under an August Sun: Battles in East Prussia 1914"

I shall now do some pointless Googling while drinking some Brains SA Gold, highly recommended.

Anything can happen in the next 30 ...er weeks

Having pondered my priorities for the year I have made a decision. The target is to design two games. Last year I had considered entering a game to the BGG solo game design contest. My chosen subject was Kursk. In fact I started out on this really well but got severely bogged down in the sizable data about the battle. I missed the deadline but, never mind, it is still on the list, perhaps number 3.

I have carefully thought through my strategy for this year (on the back of an envelope). My two subjects will be Tannenberg 1914 and Neuve Chapelle 1915. The reason for these selections is:

So which one first? Well obviously Neuve Chapelle which is why, after making a good start I have suddenly reverted to Tannenberg as the first item. Why? Because I found this brilliant little game on BGG which deals with the whole battle in four "tiles" (i.e. one map and three counters!). This has given me some real inspiration and insight into how perhaps I might pull this one together.

The way that I plan to design these games is inside out (top down might be a better way of describing it). The following are my key design parameters:
So far so good...and here is some evidence! 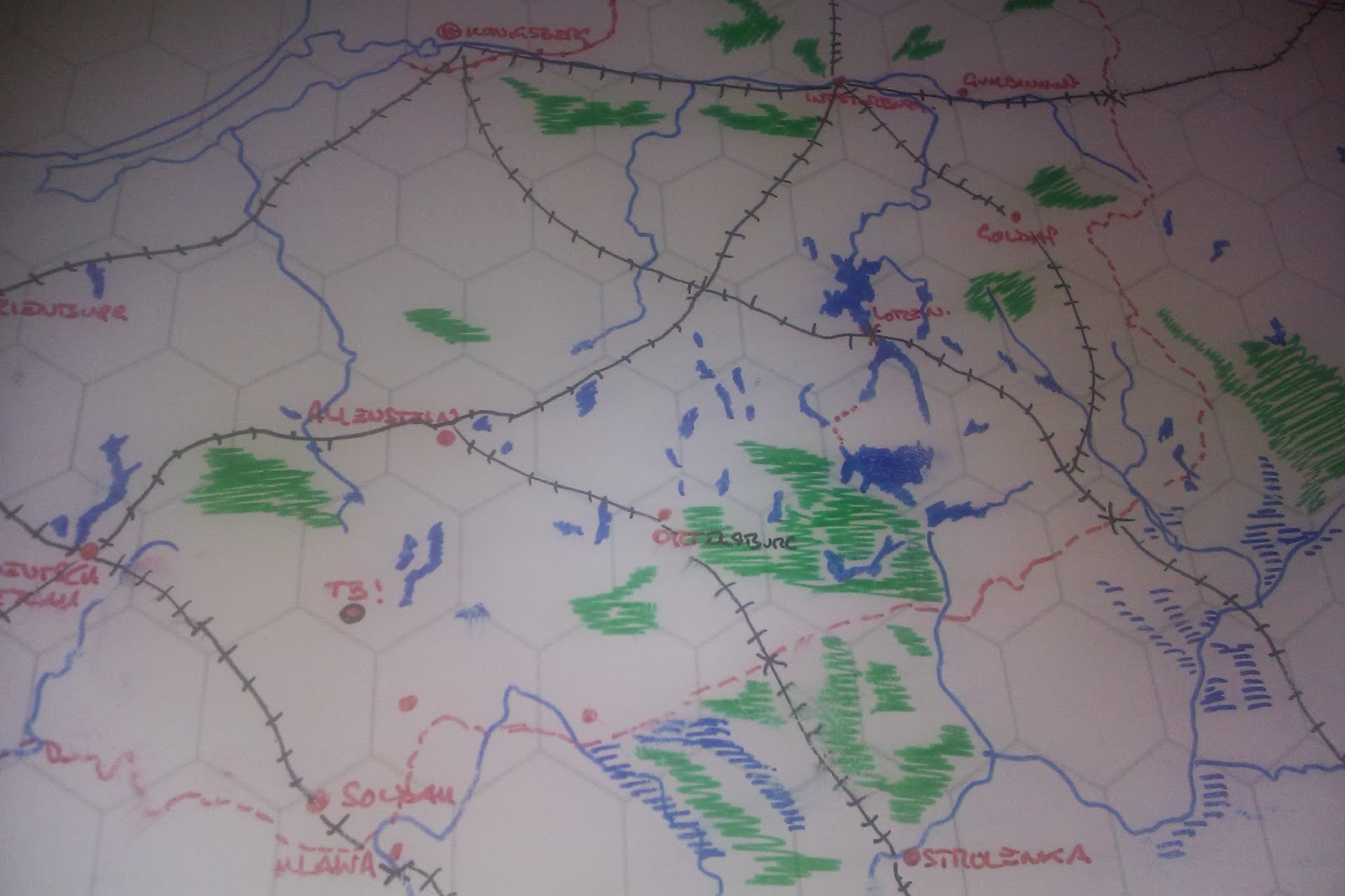 My first attempt at the map using the general map from Barbara Tuchman's book. At last, we have some action.....

Posted by Old Trousers at 20:34 No comments: