This week I have mainly been in...

A leisurely week in Scotland visiting our relatives gave us an opportunity to catch up on a few visitor attractions.


We did the Edinburgh Dungeons (too scary for some of us), the Britannia (very beige) and last, but not least, Edinburgh Castle. I haven't been to the castle since I was a kid so it was pretty much a fresh start for me. Highlights were the Scottish National War Memorial right at the top of the hill, the crown jewels (does Mr Salmond's head fit?) and the National War Museum. The latter was very well done if a little dark (under lit) in places. The whole thing impressed me with a genuine sense of Scottish nationhood, a very large step up from the petty nationalism that is featuring in the independence debate.

I found the statue of Haig rather touching. It is directly outside the museum but its subject does not seem to be overtly discussed in the museum's material. Perhaps an opportunity missed to debate this complex figure.

Having read about the Bannockburn battlefield centre in Wargames Illustrated 319 we went along without having pre-booked anything. All I can say is that it is the best battlefield centre I have visited. The 3D experience is stunning, the children found this absolutely magic and so did I. The battlefield briefing using the wargame model was good and the game itself was highly entertaining. No need to go into detail as the WI article gave a good run through. Every one who played (around 30) was engaged throughout, the children made good decisions and the lady standing next to showed great insight, for someone I did not take to be a wargamer. Game management by Amy was excellent. As mentioned in WI, there was great enthusiasm for killing the enemy royalty so wargamery tactics went out the window.

If you get the opportunity, do go along. We enjoyed this so much we will make the trip to Culloden next time we are up the way. It makes me wonder why we can't have something like this for Naseby or Marston Moor?
Posted by Old Trousers at 18:44 No comments:

I have been applying my brain to work issues recently (honest Boss) so it has been a pleasant change to redeploy the gray cells back onto Venture Fair, my developing Montrose game. 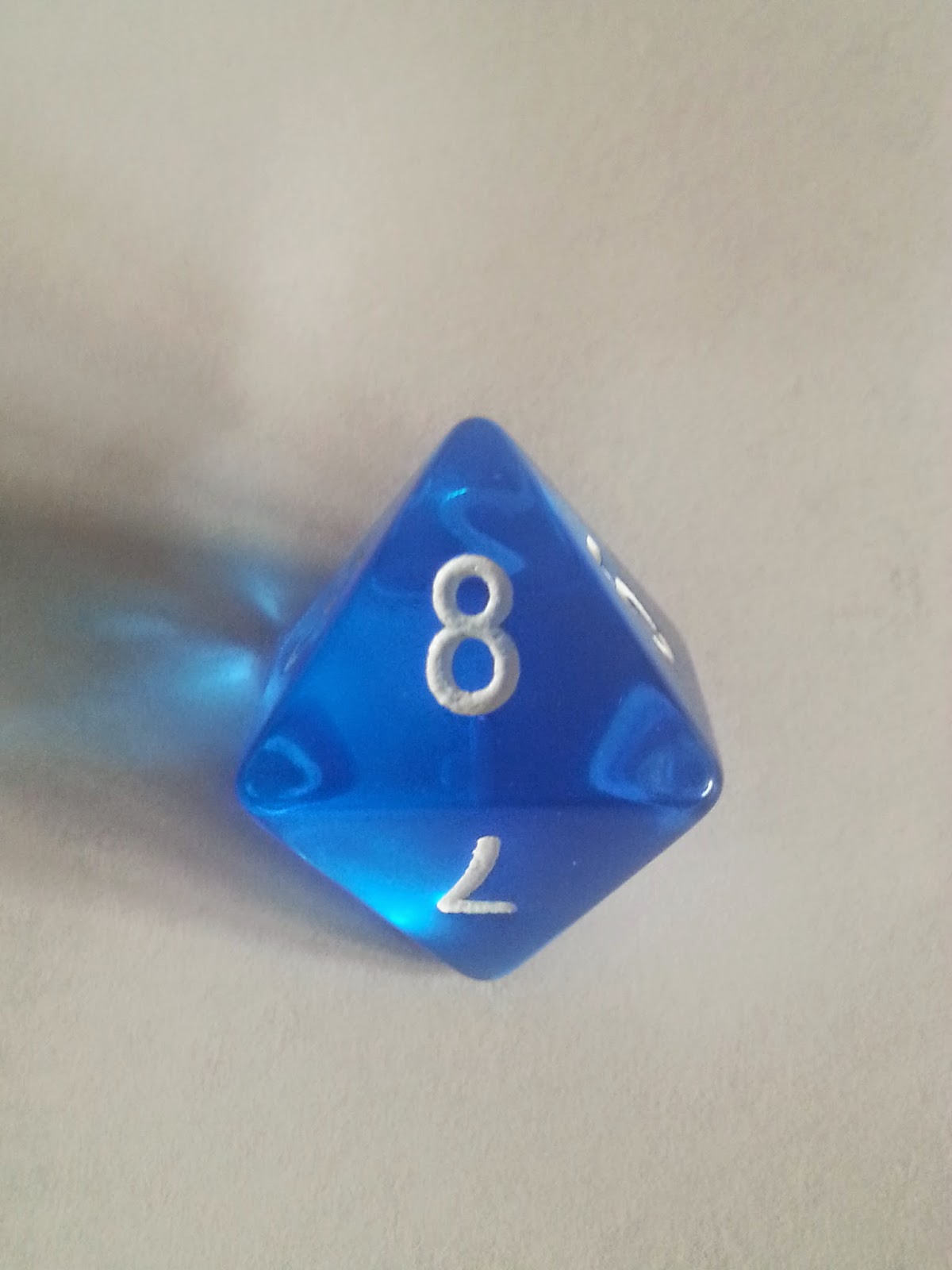 I find that, in all my projects, even quite simple problems can slow me down. For example, having progressed my Tannenberg game really quickly, the hold up is about drawing convincing rail lines on my draft map. In Venture Fair, the issue is how to resolve combat.

My conceptual model for the game is Stephen Simpson's '45 game series which uses an unusual opposed die roll. One player, the attacker, rolls a d6, the defender a d8. Deduct the d6 roll from the d8 roll, if minus the defender takes a hit.

A benefit from this is that modifiers in the d6/d8 model have a smaller impact than those for a single d6 or, indeed, 2d6 model.

I have given quite a lot of thought to various approaches including the DBA type calculation. A problem I have with DBA is that my brain finds it difficult to cope with the results (if less than but more than half and elephants are attacked by spears before breakfast...).

Even though I have a d8 I can't say I have ever used it in anger. However, I'm beginning to like the d6/d8 concept but I just can't do the mental maths. Taking one score from another may require taking off socks. Is there anyway I can simplify things?

Well yes. I pulled together a spreadsheet to look at the results distribution and realised I had actually developed a combat results table. This means that using a comparison of total scores (die roll plus modifiers) I could get an easy to read matrix.

Do we need lots of modifiers? No, a few and even then why have loads of tactical advantage modifiers when perhaps only one might do. So, depending on the circumstances, there will either be an advantage or not. Therefore, a small number of binary modifiers.

That's great, I just have to make it work in practice! 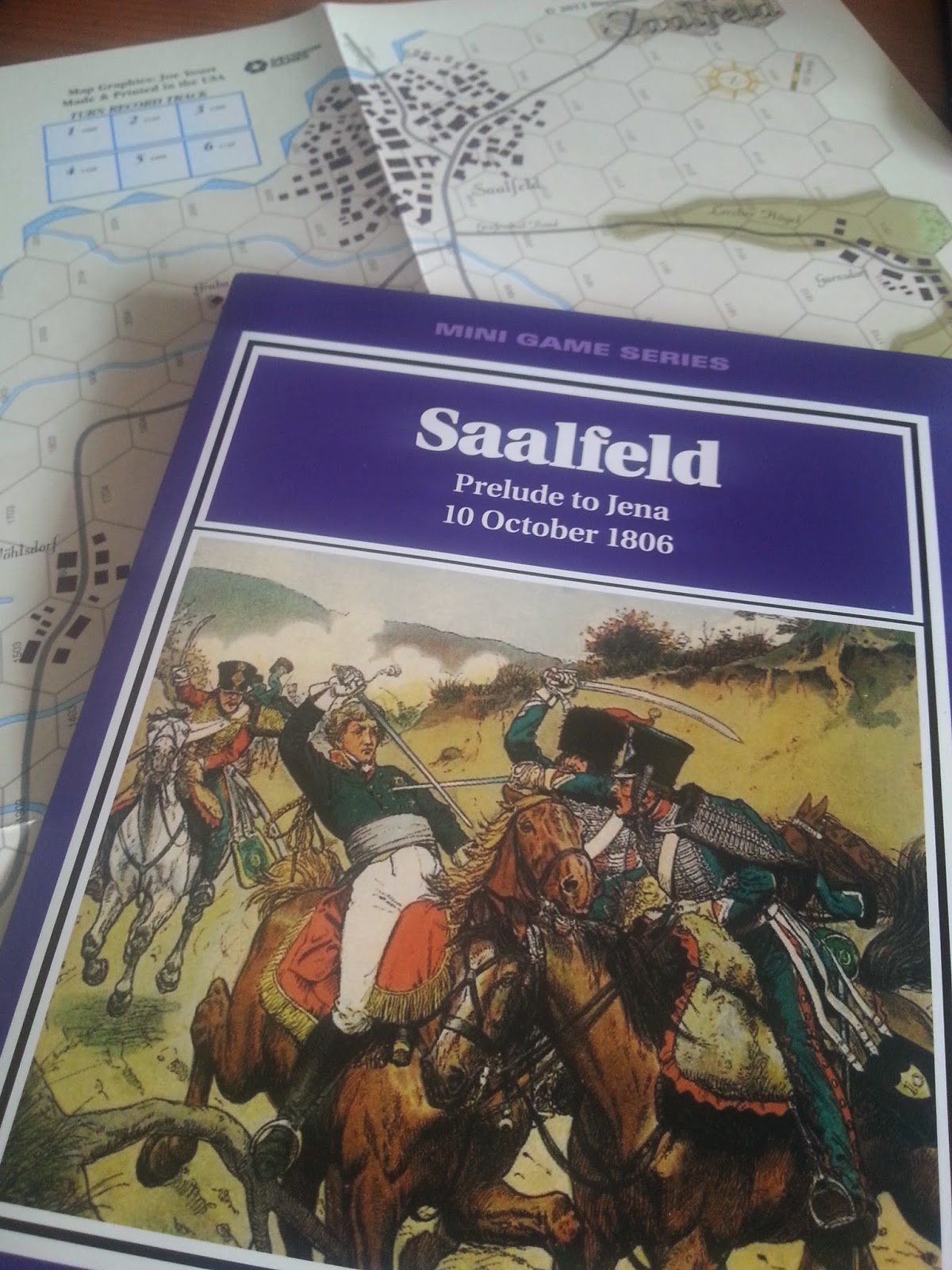 Oh, and this arrived in the post today. A first glance, very nice, just right for playing over the bank holiday weekend.

Posted by Old Trousers at 20:15 No comments:

Dude, I got boats!

I openly admit to having the willpower of someone without willpower. While pondering combat calculations (again) I reviewed the Hold the Line rules. I then wondered why I had never got round to buying the FIW expansion. Then I panicked, was it still available? A quick whiz round the online stores seemed to indicate it was getting a little scarce. I found found one at a good price from Board Game Guru and it arrived today while I was at work. 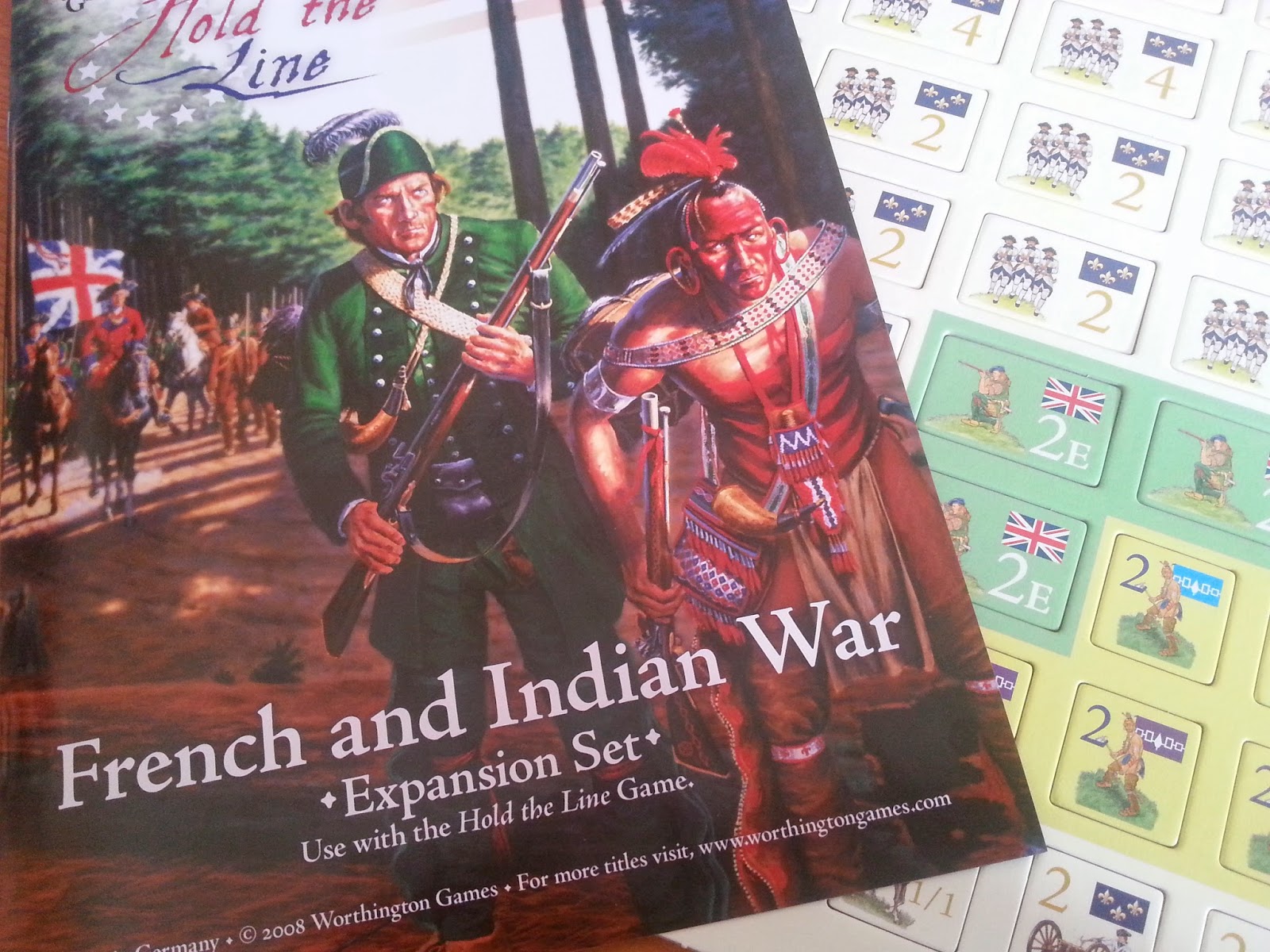 This is just very very nice. Made in Germany with top quality die cutting, you get some gorgeous French, Indian and Roger's Rangers counters with trees, forts, Indian villages and boats! The counters are so thick that when you drop then on a desk they sound like they are made of wood. 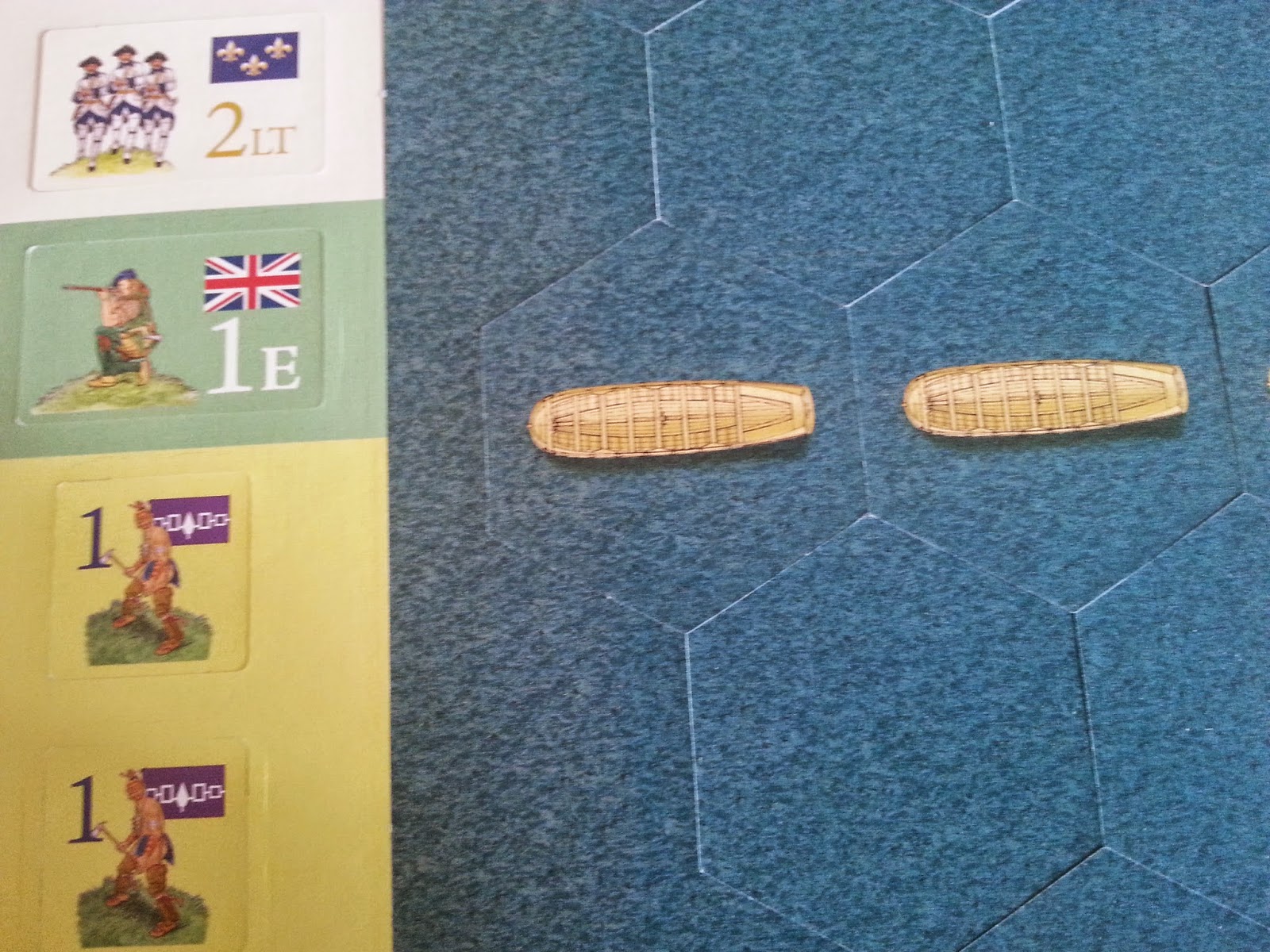 There are five scenarios (Bloody Bridge, Montmorency Falls, Ste Foy, Louisbourg and the Battle on Snowshoes. The BGG page has three nice home made scenarios as well. I'm very much looking forward to this, as soon as I've enjoyed the feeling of pushing the counters out of the frame. Cool!

Posted by Old Trousers at 19:48 No comments:

Briefly reviewing my list of leaders, and still wishing I had kept those card 1/150 scale tanks, I realised that I had forgotten two. I hadn't planned on doing a top ten, I'd be happy with a top 8, but I really had overlooked a couple of key people, and here they are:

Philip Sabin: Now Phil could be on my list for several different reasons but he is here for something that perhaps is now overshadowed by his later achievements. Phil is on the list because of Phalanx. This was published as a game by the Society of Ancients in 1993 but it also made an appearance in WI. The game features 36 battles (Marathon to Philippi) each played on a 12 by 9 hex grid using armies consisting of ten units. Simply great. Figures, hexes and small armies. Perhaps this is what sent me in this direction. I plan to revisit this game the next time I'm bitten by Ancients. No DBA for me. 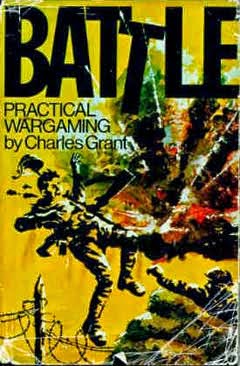 Charles Grant: I was bought Battle! by my parents on holiday in Scotland when I was a young teenager. Everyone has a book that is really inspiring and this is mine. Strange to think that we picked this up in a newsagents in Perth in the days when wargaming was perhaps more generally visible. I sold my original copy to a second hand bookshop (for pence) and later replaced it (for some £s) when I realised I couldn't do without it. Not just a set of rules but a guide to how to create a set of rules that can actually be played.

Posted by Old Trousers at 20:51 No comments:

Apart from these ones!

I have spent time this week looking at the combat mechanisms for Venture Fair. In doing this I have taken inspiration from a range of sources and, almost by accident, have come up with a list of people that I have found to be instrumental in developing the way that I look at and experience wargames. So, in no particular order, here they are and why they are important:

Charles Wesencraft: I missed out on Charles' two books early in my wargames career, they arrived too late for me, but what did inspire me was an article he wrote for Practical Wargaming on refighting the battle of Borodino using battalions mounted on bases that could be manipulated to show formation. I have never found out anything more about the rules to be used or how the game played out. A great pity because I always wanted to do something similar. However, there were some great little drawings in PW which i still treasure.

Norman Mackenzie: Norman wrote a set of rules called KISS Rommel. Play the whole campaign in North Africa on a 4" by 4" table with a handful of 6mm toys. Published in an old edition of WI but still available from here. The Free Wargames Rules site has a number of different versions of this for different theatres by an Italian wargames group under the "High Command" banner.

Prior Aelred Glidden: The good prior found a review of the Stephen Simpson rules in an edition of PW Review by Wally Simon. He adapted these rules and later wrote them up in MWAN. I have number 98 in front of me which includes his "Rules for the 18C". His "Monk's Corner' in MWAN was great but they ceased around issue 100 which was a real shame.

Panzer 8: I don't know this guy's name but he is a great producer of very simple games. Check out his website. At last count, his downloadable rules booklet contained 11 different sets, all two pagers, with more being developed. Well worth watching.

Neil Thomas: Nuff said, can't wait for his next book!

Mr Greening: This chap lived in Knoll Cottage, Dorking. He sold card models in 1/150 scale of most British, German and American vehicles of WW11. They were very cheap and the card went together well with polystyrene cement. Gun barrels were made of wire and if you were clever you could make the turrets rotate. He sold these vehicles through Airfix Magazine and I have happy memories of sitting through Wimbledon one year as a teenager and making up pretty much a whole Panzer Division and a whole British Armoured division. The only pity was the lack of 10/12mm figures to use alongside the models. I wonder whatever happened to the masters for these, I'd love to have another go.

Clive Lane: This gent had an article published in WI about using hex terrain. He had also written a comprehensive set of rules to use with the terrain with a number of scenarios from the Napoleonic Wars. What impressed me was the ability to play a large scale battle with relatively few Airfix plastics. I sent off for a copy of this (20 odd years ago). Clive sent me the rules, plus a scenario booklet with reduced scale battles as well as some very nice photos of his troops. These, unfortunately, are in the garage but I have it on my list to dig out the photos to post here. Inspirational, especially the use of bog standard Airfix types.