Although the rules are not yet complete, and there is much to do, I'm happy to share this current version in the hope of eliciting some useful feedback from those that take an interest. You can find them here.

The interesting thing about the mechanisms in this game are that they are very fun and very fast. Even playing both sides solo, the rules contain such a remarkable amount of uncertainty that they are very challenging. Mastering the tactics though will be the real trick.

My thanks as always to Peter for the fundamental ideas from his Grid Based SciFi game which form the basis of these rules.
Posted by Old Trousers at 19:43 4 comments:

it seems to work! 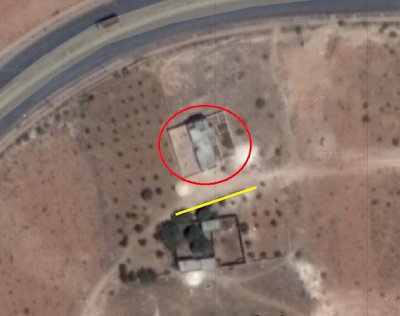 Mission: This area has been infiltrated by OPFOR during the night. Surveillance indicates the enemy have occupied building B6 (red circle) with the intent of interdicting the main supply route (dual carriage road to north). The intent is to enter the building using fire and manouvre and destroy enemy forces in close combat.

Enemy: Estimated at 10, light weapons including automatic weapons. Likely course of action is to resist as exfiltration routes are limited.

Own forces: Three fire teams from ready response squad plus one HMG team as manoeuvre support.

Terrain: The enemy occupies a walled area (low walls) surrounded with open ground. scrub and trees to the south provides a covered approach to the rear of B6.

Execution: HMG team to provide support by fire from covered position to left of start line (yellow) with fire team 3. Teams 1 and 2 to manoeuvre and gain access to walled area and then assault and clear the building.

My apologies to anyone that knows how to use METT-TC and OPORD procedures correctly. This is a quick trial run of the basic mechanisms in GZ to see whether they produce the game I have in my head.

So, not quite like the surveillance photo but not bad. OPFOR occupy the house and a small walled grove. Coalition in the tree line, teams 1,2 and 3 reading from the right with the HMG team on the far left. 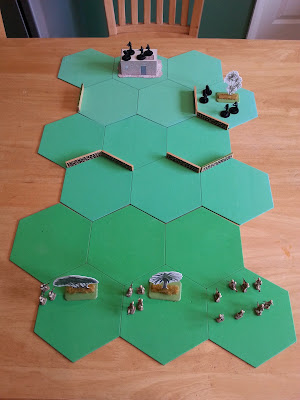 By the way, Fab Foam hexes and Junior General paper house and trees. The low walls do not block LoS but do provide cover. Friendly teams do block LoS.

0515: HMG suppresses the OPFOR team on the roof but it rallies and goes into overwatch. Teams 1 and 2 manoeuvre. 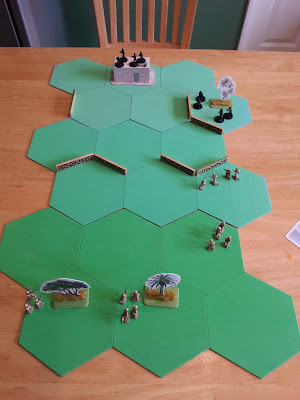 0525: The HMG team keeps OPFOR on the roof suppressed while Teams 1 and 2 start engaging the enemy in the grove to little effect. 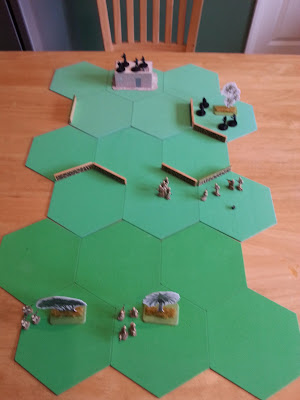 0530: The HMG team fully suppresses the enemy on the roof who now disperse (destroyed, but in reality they couldn't take the heat and scarpered). Coalition pop smoke to obscure the enemy's LoS from the grove. 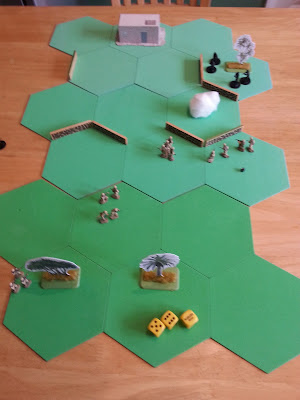 0535: The guys in the grove make a break for the house as Coalition teams move up to set up a new base of fire. That HMG is proving tricky to move up! 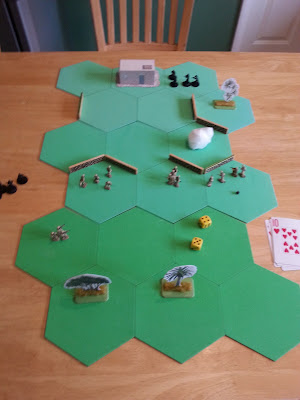 0540: Small arms fire pins the OPFOR team down in the open, they are disrupted and finding it hard to rally and move into cover. Unsportingly, Team 3 with a great LoS pours intense fire into the enemy who crumble and run. My plan had been to use Team 1 to try out the close assault rules. 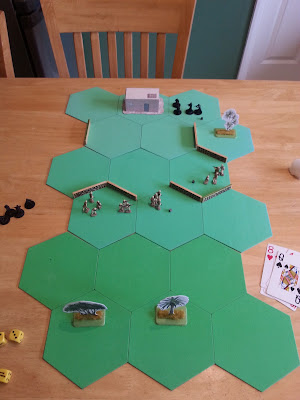 AAR: Did the rules do the job?

Absolutely, I'm really happy with that little battle. It told a story and the tactical feel was spot on. Even though the rules are simple, they are a bit slippery and I made some errors.

Tactically, although in this scenario this was the right start line (concealed approach and cover for the support teams), it was too far from the building to make a rapid assault.

Although I rated the Coalition troops as three activation dice (i.e. very good) and the OPFOR troops as 2 (which is not shabby), if the OPFOR had an HMG on the roof then there would have been problems as they would have raked the start line. As it was, two Coalition teams took casualties.

Overall, a nice little battle. My fallback plan was to call in an airstrike which I might do next time just to see how it works.
Posted by Old Trousers at 16:03 5 comments:


On my first post about GZ Duc commented that it could be used for Hue or even a 1985 cold war gone hot battle in Germany. Well, the funny thing is that I chanced upon this article on the War is Boring site about the new book on Hue by Mark "Black Hawk Down" Bowden. The book will be released in the UK in a few weeks and looks like it will be really interesting.

What caught my eye is the video above of a CBS news report from the battlefield. This shows some fascinating things:

My design objective with GZ is to make a simple game that feels like the real world, but without the bullets. This seems a bit tricky but I'm hoping I'm almost there. More on this soon. In the meantime, I'm dipping back into Leo Murray's Brains and Bullets which is very much on the money in terms of the reality of combat.
Posted by Old Trousers at 14:15 3 comments:

how cool is that? 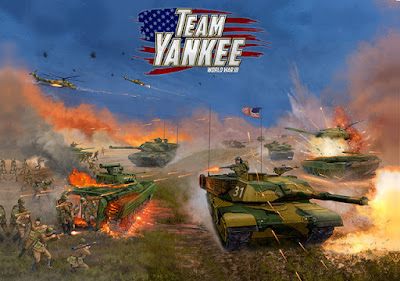 I went into my local game store (Battlefield Hobbies) the other day. The mission was to find under coat (Vallejo Surface Primer), matt varnish and matt medium. Mission accomplished. However, I noticed a big stack of Team Yankee rule books, the small version that comes with some of the other products. I asked how much they were to find they were free. So, I now have the rules. Something to ponder. I don't know if this is the practice elsewhere but something to bear in mind. 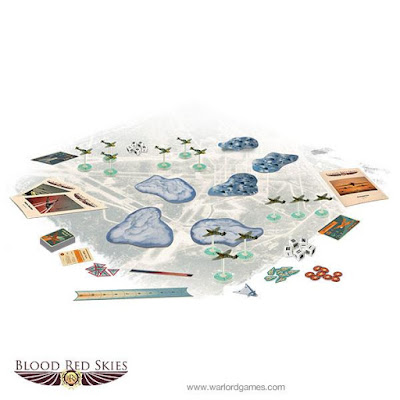 I was reading Geordie's Big Battles blog yesterday and found this great description of a small Battle of Britain fighter encounter. The rules used were Blood Red Skies. I hadn't come across these before and tracked them down to Warlord Games. The rules are actually free and you can get them from their website. Warlord have some 1/200 aircraft product coming out later this year which the rules will support. A bit pricey but I reckon you can have a lot of fun with just the free rules and some nice Zvezda kits.

Now, I can either play around with the free stuff or get back to work on Ground Zero. Decisions, decisions!
Posted by Old Trousers at 10:29 No comments: 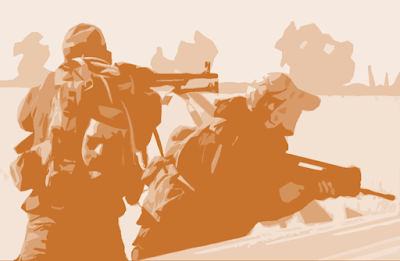 I'm continuing work on the Ground Zero rules and am aiming to have an initial playtest version out in the next week. This will feature infantry only combat so will be very simple. This time round I'm looking to get feedback as the rules develop.

In the meantime a few shiny new things have popped up, they are mainly free too!

Panzer Grenadier: The game system from Avalanche that has millions of scenarios. They are now advertising a free try it out module, all you need to do is pay postage for the counters and map, the rest is downloadable. You can find this package here. You can also download the latest rules and even a set of modern rules for free.

I have never looked too closely at this system, I simply don't like the maps, but it might be worth it for free. I'm still very much into Flying Pig/Tiny Battles Platoon Command system at present to want to branch out (even further some might say!).

Lee at Gettysburg: This is a Lock n Load game that is a revamp of one of their POD games. The reason for mentioning this is that is is on Wargames Vault for "pay what you want".  I leave it to you whether you can resist the temptation to pay not very much for a $14.99 game at full price. I for one really like the map. It may be a little odd for some people's taste but it suits mine fine.

Last Full Measure: Another Gettysburg game, totally free from the designer's page here. I don't like the look of this much, very late 1970's, but that doesn't mean its not a good game!

Thanks to Consimworld News for some of these references!