What's inside a CoW?


Having got lots of data from the Correlates of War (CoW) project I have started having a look to see how useful it is. The data covers 1816 to 2007 and consists of six elements that combine to produce a single Composite Index of National Capacity (CINC). The critical point is that this is a time series across much of the world's population and can therefore be used to identify trends over time.

The factors worked into the CINC are:

As such, these factors represent actual capacity rather than potential capacity. Which is fine and very useful. Other types of analysis using, perhaps GNP/GDP and other factors would be complementary.

The data itself is very simple and comes in a csv file. To have a play I established a data set around WW1 and flagged countries to the three power blocks (Entente, Central Powers and Neutral). I identified the years each were actively at war (engaged militarily). One thing I noticed from examining the data over a short period (1914-1919) is that the fact the data is in annual chunks makes it difficult to use at granular level. Nevertheless, here are some graphs: 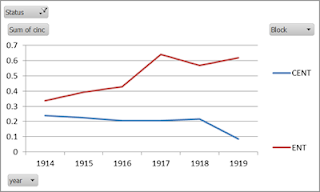 Graph 1: Simple comparison of total CINC of Entente and Central Powers. The 1917 Entente blip represents the presence of both Russia and the USA in the block for at least part of the year. 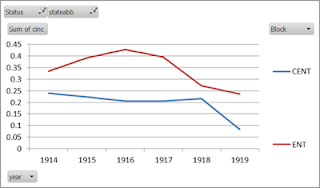 Graph 2: The comparison without the inclusion of the USA. This shows the Entente taking a big hit in 1917 with the loss of Russia. It is not surprising that the Germans thought they still had a chance to win in 1918 before the bulk of US forces arrived in Europe.
﻿ 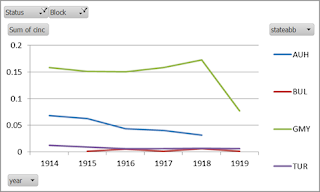 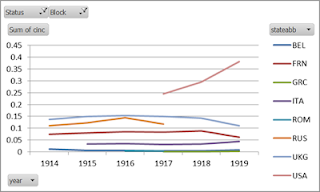 Graph 4: The same analysis for the Entente. The entry of the USA was a war winner after the loss of Russia. However, for the first four years, the UK was the engine of the Entente, France coming in only at third, after Russia.
What is interesting is that the French numbers appear relatively even across the period, even though they lost a significant proportion of their iron production (~70%) after the Germans took the Briey area in 1914. This bears some more thought and, perhaps, comparison with some other data. Perhaps the other numbers (military personnel or expenditure) have compensated.
Otherwise, some really fascinating stuff that will repay a lot more careful analysis.
Posted by Old Trousers at 20:57 No comments:

Email ThisBlogThis!Share to TwitterShare to FacebookShare to Pinterest
Labels: Correlation of Forces, CoW

QJM and hot COWs of war


No posts recently because I am working on a number of projects, eventually to be revealed here, in the vein of "ask a stupid question (...get a stupid answer)". I've also been struggling with formatting on Blogger and finding it difficult to get things to look the way I want. All of this is a bit time consuming on top of the day job and family!

Well, there is some news and its about numbers. I've been working on a "stupid question" about artillery in the first world war (1914 to be precise). In doing some basic comparisons I have decided to use a version of the HERO QJM (quantified judgement model). While this model can be problematic, it is actually quite useful for comparing weapons within the same weapon category (e.g. artillery) and within the same period (timeframe).

Background information about the QJM and the latest version (TNDM) is at Dupuy Institute. A simplified version for wargaming is discussed at Alternate Wars.

One thing about the QJM is that the owners (the Dupuy Institute) have quite rightly kept a close grip on their data so it is rare to see large chunks of the data in a public forum. I was therefore very surprised to find, during a literature search, a very complete data set for land and air weapons from around 1950 to 1990-ish. This appears as an annex to a monograph prepared for the US Army School of Advanced Military Studies at Fort Leavenworth by Major D R Hogg. See Correlation of Forces: The Quest for a Standardised Model available through the Defence Technical Information Centre (DTIC) at DTIC. They also have a really interesting range of other papers on correlation of forces which I'm working through at the moment. However, if anyone knows of a publicly available WW2 QJM data set, then please let me know!

I have also recently read a book (honest), Military power: Explaining Victory and Defeat in Modern Battle by Stephen Biddle (Princeton University Press, 2004). this is an interesting book which ploughs a similar furrow to the QJM but from a different perspective. What was very interesting is that it uses an academic dataset to explore correlation of forces. The dataset originated with the Michigan State University and is publicly available. The "Correlates of War" (CoW) database holds peer reviewed data on the national and non-national combatants in wars over history. Its objective is to "facilitate the collection, dissemination, and use of accurate and reliable quantitative data in international relations". It allows exploration of the correlation of factors with such things as propensity for war but also success in war fighting. One interesting fact is that success in war correlates highly with the number of pigs in a country!

What this means is that the time I have recently spent looking at population and GDP/GNP data for 1914 combatants was pretty much unnecessary. Check out the database (sorry, I think that should be dataverse!) at CoW. Happy reading numbers dudes!