What did you do in the Third World War Dad?

Well children, there wasn't just one WWIII there were loads! I remember the first one well. It was 1962 and I can recall them testing the nuclear raid warning sirens. There was a big one outside the Trebor factory. I can't think there was any point to them as the idea was that you would be dead in four minutes which isn't much time even to finish lunch. We won that one, the Russians lost and the Cubans have been made to stay at home for nearly 60 years.

The next WWIII was in 1965 but it was very secret. They made a documentary about it and, apparently, we pretty much all died. Because it was secret no-one really noticed until 1985 when we all seemed to be OK again.

There was a rumour in 1975 that the Russians had nuked Wurzburg but this was only a game. As were Red Star/White Star, NATO, WWIII, Next War, Fulda Gap, Mech War '77 and Firefight. By the time they got to NATO Divisional Commander most people were shell-shocked and needed a rest. Public Information films didn't provide any comfort!

We then had another two pretend WWIIIs made up by the military to get more funding by frightening the citizens. First, in 1978, Sir John Hackett described the future war that would break out in 1985. Then in 1979 Shelford Bidwell made the case for more cash in World War 3.

In 1983 the NATO big boys played a wargame called Able Archer. Unfortunately, the Russians, being a totalitarian criminal enterprise, didn't have a sense of humour. Luckily, the war was another pretend one but only because two officers, one Russian and one American, took morally sound decisions. Unfortunately, no-one made a documentary about this because nothing went bang!

Well pleased that WWIII was over we had another documentary in 1984 about when they nuked Sheffield which most people thought was a great idea.

The final WWIIIs took place in the 1980s. These seem to be the basis for most current WWIII themed scenarios and games and follow on from the Able Archer turmoil.

The best of these books are: 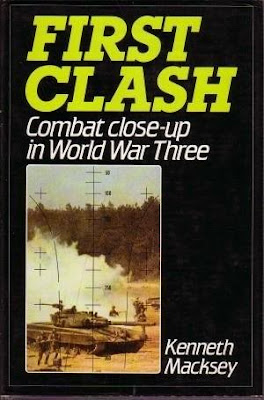 First Clash by Kenneth Macksey and written as a training guide fo the Canadian Army, featuring the 4th Canadian Mechanised Brigade Group fighting off a Soviet attack in the summer of 1984. 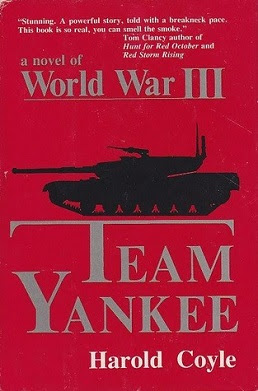 Team Yankee was written in 1987 and probably sets the story in a similar time period. An excellent book and good game from GDW. 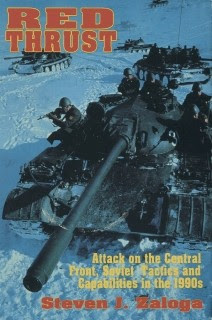 Red Thrust by Steven Zaloga is interesting because it describes a number of scenarios on the southern part of the Central front which provide a basis for analysing and evaluating Soviet capabilities. Although the war is nationally set in 1993, started by East German disturbances and starting a conflict over Berlin, the descriptions are equally valid for earlier in the 1980s, although the book itself was written n 1989. This shortly before official end of WWIII between 1989 and 1991 depending on your perspective. 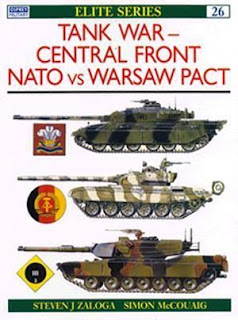 Tank War: Central Front, also by Steven Zaloga, was published by Osprey in 1989 and, for my money, is a great place to start on WWIII gaming.

The big problem was that some people decided that having won WWIII there wouldn't be any more history and liberal democracy was the new defacto world governmental model. Frances Fukuyama was possibly ill advised to adopt this position since we have had lots of history since then, mostly not very entertaining. Liberal democracy looks to be an endangered species just now, who's up for a game of Dixie?

Superb - loved this post .
Funny you should mention GDW's Team Yankee - it gets a lot of press with WWIII bloggers. I still love that game, so much so that I collected the whole First Battle series.
I think I'm adding some commander traits and a bidding turn style sequence when I get time to do it :(

I get Hackett's sequel to Third World War (the untold story) when I was about 11 and spent 38 years looking for the original - then found it last year.
Great stuff in both.
The original first edition of 'How to Make War' is also recommended reading I think.

Thanks Duc, much appreciated. I have had a nice day reliving the 1980s and hunting out WW3 books.

I still have Team Yankee, a great game but needs a bit more doing to it, especially command and control. I was disappointed with what GDW did with Blood and Thunder about this. One for a rainy day!

Interesting. I had the Team Yankee game (from GDW), which caused me to get the book to check the scenario background information.

My reading in 1980 was The Third World War by General Sir John Hackett and others. A fascinating read that took me to the sequel, The Untold Story. I have recently re-acquired both books. The books are well written and unfold in a believable way. I think they were more chilling because it was a period when people really did believe that such a thing was a possibility and that the possibility of ‘call-up’ was not something to be dismissed out of hand.

Thank goodness for 40 more years of relative peace since then.

Just on the Team Yankee thing...
I played 'Altar of Freedom' a while back for ACW.
A very nice command mechanism, whereby you assign numbers against commands in 'bid' format, in conjunction with a turn clock - which might eliminate some low numbers from even getting a turn, but also uses command 'traits' to manipulate activities.

It struck me how these traits would be perfect for NATO/WarPac in terms of making the units perform in characteristic manner... 'Soviet Drive', 'Artillery Expert', 'ATGW positioning', 'Knowledge of Ground' etc etc

Hi Duc, Thanks for the tip, that's a new one on me. I agree, WWIII needs some very specific capabilities and restrictions on both sides. I'll look them up!

Hi Norm, Nice to hear from you. I'm sure that people our age were impacted by the background level of fear of annihilation, adversely or otherwise.
I'm afraid I gave the Hackett books away a long time ago to Oxfam so would love to pick them up again. My thoughts are drawn in this direction by China/Taiwan and the Kaliningrad scenarios. I wonder if there are any books just as good on current issues?

I'm a dinosaur sufficiently old to remember Kennedy coming on TV in 1962 to tell the people about Soviet missiles in Cuba, and the government's decision to impose a blockade. Before he got that far in his speech, my mother, remembering Pearl Harbor very well, wondered if we were at war. He and my father must not have been TOO worried about that, however, as they (and I) resumed painting the kitchen--not too useful an activity if war were in fact about to happen.

I've always really enjoyed "The Missiles of October" and "13 Days" about the Missile Crisis, although I did not really think either movie was all that accurate. This turned out to be confirmed one afternoon when my wife and I visited a friend of hers. Somehow the subject came up (and why, I have no recollection); when I mentioned the movies, the friend's husband, a retired CIA employee, shouted, "Both of those movies are bullshit! I can't tell you how I know this, but they are both bullshit!!!" Good times, good times.

Thanks Chris. Yes, in retrospect,they were good times. I had relatives in the UK Civil Defence organisation and their advice was that there was no point worrying as we would all die quickly in the event of a nuclear attack. Continuing to paint the kitchen sounds like a good strategy!

Intereting post ."Kids today" just don't realise the world could end in four minutes when we were growing up ... :) Global warming and climate change was to many just hippy speak then.

I remember the air raid sirens going off during a Maths lesson mid 1980s (1984/ 1985?) when I was at an all Boys secondary school in the London area - four minutes to live and stuck in double Maths. Some of my school friends were trying to work out if you could run to the our nearby sister girls school in four minutes ... arguably speculating on that, it's a form of Maths (and Biology?) lesson.

Cold War American schools practised / knew you had to hide under your desks. We had no clue what to do (neither I suspect did our staff.) We were afterward told it was a "siren practice" or test for "London flooding".

Older Tankie friends of mine who were based in Germany in the 1980s told me similar stories of being suddenly ordered to crew their tanks and await the Soviet hordes for cramped uncomfortable days on end.

Happy memories! I always thought that using the same sirens could be confusing, do you move to higher ground or dig a hole?

I guess much weird stuff went on at the time, funny to think that the information won't be released for either 75 or 100 years. I'll never find out at that rate!

I retired before WWIII started. It sounded a bit risky.

Hi Chris, Good move! I suspect it would have been a bit dangerous!

The war that never was but us wargamers still have the kit for it.

Anecdote:
Post Cold War I heard that there was a the great "mungo and Mary" staff ride around the potential 'theatre of operations' which caused great hilarity between East and West staff officers - namely at what they thought the other side was going to do respectfully

Both gave earnest briefing to each other

The quote of the time was from the then senior officer (previously a Soviet Commander in the Army Group) present on seeing the NATO set of Soviet expectations was, summed the situation up by saying, with tears rolling down his face, "I wish we would have F*****G come"

Ugh .. glad it was all hypothetical!

I have been searching for the report of a seminar/meeting between the two sides. I think Stockholm 2006 or similar.

Based on what I have read, if someone had started it off it would have been the biggest shambles ever!

Still, great material for a wargame!