I have just turned in a major piece of work on a development project so now have a short space of time to do some wider thinking before the next stage.

My jumble of thoughts are on the subject of modern warfare, the type of small unit activity I'm working on in my temporarily paused Desert Eagle. What set off this train of thinking was the recent battle between Turkish troops supported by their Free Syrian Army proxies (Ahrar al-Sham) and ISIS for the control of al-Bab, a key town in central northern Syria. This is at the outer limits of the current Euphrates Shield operation. The Turks set out to take al-Bab and fought an intense battle for the hospital area. In this battle they lost 10 Leopard 2A4s, a Sabra M60 plus 4 APCs/armoured recce vehicles. Bellingcat have covered this here in a brilliant article.

Apart from proving that the Turkish Leopards are a bit feeble, as was seen in the earlier border fighting, it also shows the scope for using lots of tanks. I have become interested in the possibility of using 12mm scale for this type of game.

I have checked out what is available and I want vehicles that are quite large and the ability to use individually based infantry. 10mm is pretty barren in this respect. However, the Minifigs 12mm range is comprehensive. They do packs of three different types of arab insurgents (28 for £4.05) and US and Russian special forces. Irregular miniature do a range of large 10mm modern troops specifically to fit with 12mm vehicles which is described as Modern Bush Wars. So all set to go? Very nearly. 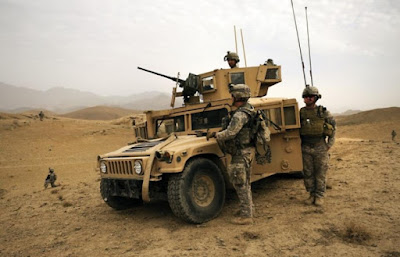 Minifigs do all the tanks you could ask for plus HMMWVs and Toyotas with MGs and recoilless guns. What they don't do is the new breed of HMMWV with armoured turrets which are the de rigeur vehicle for the Middle East. Where can I find something that will fit with 12mm? Not even Shapeways have anything that fits. I don't relish trying to scratch build turrets in this scale! Any ideas?

It might be worth re-considering Pendraken 10mm, they are presently re-vamping their vehicles and at Salute will release modern rules - the combination of those two things is that they are on a monthly basis releasing new, nicely detailed figures and they are putting a lot of effort into their moderns. It may well be worth dropping them a line and asking whether a HMMWV is on their 'to do' list.

Saw your comments over at Peters blog re activations and your thinking re a hexed version of Black Ops. That sounds interesting, I have the Osprey rules, but tape measures and forward arcs in tight spaces don't do anything for me ... hexes seem like the ideal solution :-)

Thanks Norm, That's good news. I didn't know about Pendraken's plans so will drop them a line as you suggest. I know that the 10mm and 12mm ranges are not strictly compatible so want to be able to take a decision one way or the other.

I think Black Ops will play nicely on a small hex grid, especially the suppression rule. Peter's activation mechanic is really good because it allows major differentiation between militia types and SF troops.

Could you repurpose the turrets off of Ferret Scouts? At 12mm with judicious painting many would not notice.

Thanks for the suggestion Brig. In 20mm I'm thinking of using M113 ACAV turrets so that might be an option in 12mm. I have just found a Japanese resin HMMWV that would fit the bill but they are >20 euro's a piece!