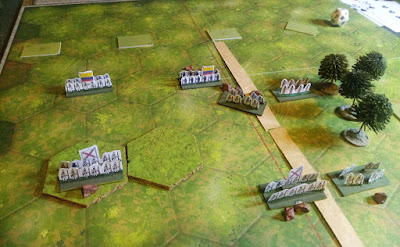 I'm really pleased with the number of people who have given this game a try and provided feedback. Lovely to see the variety of styles and periods. The picture above is from Kaptain Kobold's blog showing his paper Liberation figures in action.

The Kaptain has also posed some questions:

Q1: If I move a unit adjacent to an enemy unit, is it automatically assumed that I've charged? Or can I sit tight and opt to shoot when eligible.


Q2: Also I'm guessing that a unit unable to charge an enemy that finds itself adjacent to such an enemy can still shoot at them.

Q3: If a unit is obliged to retreat but can't, what happens?

A3: If required to retreat and the retreating unit is forced to: leave the map, enter a hex containing impassible terrain or a hex containing another unit, it must be eliminated and removed from the game. A tough outcome.

Q4: Finally, it says that Light Infantry can interpenetrate friendly units. But with a move of only 1 hex it can't do this without exceeding its movement allowance. So how is this possible?

A4: It is not possible! You are correct, as Light Infantry can only move 1 hex they cannot interpenetrate.

Email ThisBlogThis!Share to TwitterShare to FacebookShare to Pinterest
Labels: OHW, Simplicity in Practice

Thanks for taking the time to answer these. The not being able to retreat one is brutal, although it's in the original SiP. I allowed some light infantry to retreat through a single friendly unit behind them, and was also flexible in my interpretation of how retreating away from the enemy was resolved.

Unfortunately the answers open up some more questions:

(i) If a unit enters hexes adjacent to more than one enemy unit, which one does it engage in close combat?

(I assumed it could choose)

(ii) It is possible for a unit to enter a hex adjacent to an enemy unit, but not have that enemy unit to its front. Does close combat take place?

(I wasn't sure what to do in this case)

(iii) If a unit is activated and has an enemy unit adjacent to it and in its front hexes, is it obliged to charge if the enemy unit is a valid target?

(In my game I had a unit sat on a hill which was charged, and took a hit, but was allowed to not retreat because it was defending a position. When the unit on the hill was activated I was unsure if it was forced to engage its original attacker in close combat, where it would be at a disadvantage, or whether it could simply shoot. I assumed that initiating close combat was optional if the units were already adjacent)

(In SiP they turn to face the opponent after the retreat.)

(v) More of a comment. Light Infantry do seem rather good (Neil Thomas hints at this in his notes for SiP), in that with no facing they can't be flank attacked. In SiP, Light Infantry have flexible movement, but are vulnerable in close combat. I'm wondering if their ability to move and shoot in any direction could be offset by them taking a -1 in close combat? I might try it.

(To be fair their inability to move adjacent to enemy units did have an effect on my game in a rather cheesy way - a unit of line infantry placed adjacent to, but behind, the objective hill, so out of sight of some lights, prevented the lights from moving onto the hill to occupy it. So maybe this is disadvantage enough.)

Anyway, thanks once again for taking the time to go through my questions.

A problem that persists for me when hexing Neil Thomas is that though te conversion of 6" to the hex is perfect, it doesn't deal with those units that he gives a movement allowance of 9" to.

I have always ignored them and rounded them down, because cavalry of course are getting the 2 hex move and especially on an area as tight as 6x6, that already is a lot.

Perhaps the 'potential' of 9" movers can be partially 'felt' by bringing in a randomizer as to whether they can move further, or allowing a swapping of positions with an adjacent unit to show interpenetration or even a dice rolled at the end of the turn or a card system introduced that allows them to move 1 hex at the end of the turn i.e. after everything else is done, just to give a hint of their flexibility.

Anyway, it is just after 5 AM and my mind is still foggy! so I am just thinking aloud, with less of an emphasis n the thinking part :-)

Would giving light infantry 2 moves only to pass through other units work? That would allow them to retreat though a friendly unit, as light infantry would do.