The purpose of any hobby or interest must be to transport the individual to another place and or time where they can experience a different world. I think that's why so many films and novels just don't do that for me anymore. I'm too old and have seen to much in too many different places.

However, sometimes something just grabs you by the bits and says, this is really interesting lets go! If I had the time, money and freedom I'd be off to the Vendee tomorrow. Perhaps I should already have been there.

So today, amongst other important domestic activities I have been busy planning a version of "a la Carte" for the Vendee based on the battle of Cholet in 1793. First job has been to knock up some counters. I have some great stuff from Junior General which has not required too much effort.

I have printed out some trial counters but these are a little disappointing so the following are snaps from the screen.


And here is a close up of the revolting peasants. I'm really pleased with these. They are based on Daniel Harper's United Irishmen from Junior General and require only some minor colour changes, a new hat and some sacred heart badges. Unfortunately all this lovely detail does not come through on the final counters. 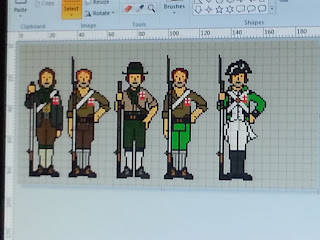 Never mind, I'm sure I'll find a way of getting this onto some counters. More to come this week I hope.

Posted by Old Trousers at 20:55 No comments: Links to this post

Email ThisBlogThis!Share to TwitterShare to FacebookShare to Pinterest
Labels: Vendee

Why have I never bought Crossfire? I've no idea but as it has been reprinted I'd better get a copy.

Why doesn't Crossfire use hexes? I don't know but maybe they didn't have hexes in the olden days (as my children point out) or perhaps, as I might say, we were too stupid to realise that we could use hexes anytime we like!

My comment is that this bloke is a nutter but if you want to know about slinging techniques then he is your man. Top bloke.
Posted by Old Trousers at 20:24 2 comments: Links to this post

Email ThisBlogThis!Share to TwitterShare to FacebookShare to Pinterest
Labels: Crossfire

Some thoughts on where to next...

A combination of health and work issues are keeping me very quiet on the hobby front at the moment. Nothing to worry about but but I'm feeling a bit semi-detached at present.

However, yesterday I picked up the latest WSS. It fell a bit flat with me, other may disagree of course, but I didn't get excited until I came across Rob Harper's article on the Battle of Cholet 1793, as illustrated above. For those of you not in the know, this was one of the key battles of the war in the Vendee. This is an extremely interesting war which still causes quite a bit of historiographical discussion in France. It has got rebels, ex-Royalist regular troops, the potential for emigres and British support, foreign fighters (I've heard that one before) and competing and incompetent republican generals. Simply brilliant.

The best bit is that WSS did not include two other articles by Rob including a general introduction and an item on the battle of Thouars. You can get these on the WSS site for knowt. There is also a surprisingly good article on Wikipedia which is well worth a read.

I have kept a series of articles from the old Miniature Wargames covering some of the key battles of the war in the Vendee with a period specific set of rules. Lovely and something to have a go at over the summer, while watching some rugby I hope! 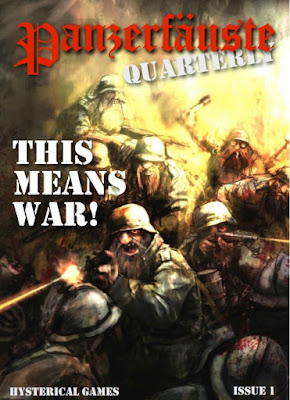 The other interesting thing that I came across this weekend is the first edition of a new periodical called Panzerfauste Quarterly. Panzergrenadier Dwarves anybody? Get it for nothing from Wargames Vault, it is by Hysterical Games. Well worth a look.
Posted by Old Trousers at 20:51 No comments: Links to this post

It has been six months almost to the day since the Kickstarter kicked-off and now it has arrived, and with some extra bits. 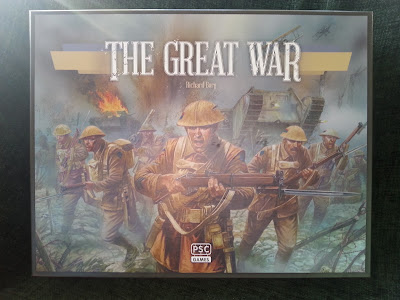 The box of course, slightly dinged from the inclusion of the extra sprues outside the box which got pressed into the cardboard during posting. Nice all the same. 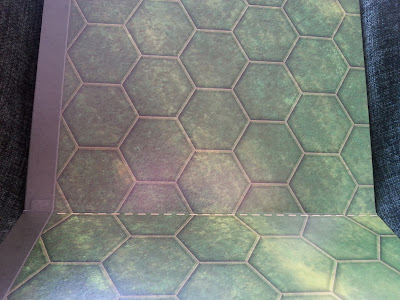 Big and nice 13 by 11 hex map board. Green one side (for early war) and brown the other (for the muddy bits). The hex grid runs up to the edge at the sides therefore allowing it to be easily butted up to other maps for epic (Overlord for M44 types) games.

Eight metal generals, one of the extra bits. I'm hard pushed to put them all into their correct nationalities, I think we need a guide! 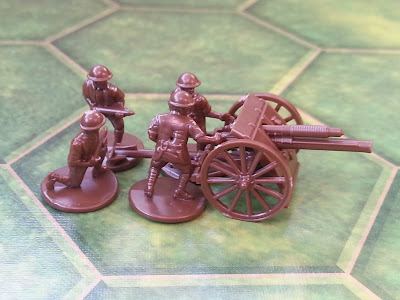 Mine came with five 18pdrs and five 77mms and their crews. The 18pdr looks good. Plastic is hard (a little brittle perhaps). The gun snaps together nicely but feels very light, as do the gunners. Since these models are for the representation of off board fire (reserve artillery), then they can be appropriately based without any game problems. 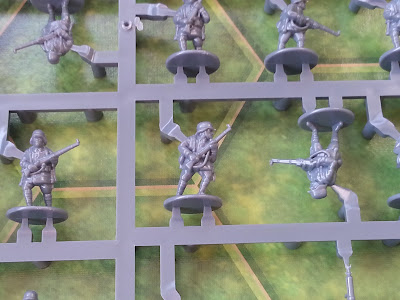 German sprue from the starter box. These look good. Nicely molded and not too fragile. Still worried that they might be too brittle. Time will tell. I must admit I fancy painting these guys up and mounting them on pennies (or similar) to give them some weight.

Here is a nice video review of the whole product if you want to see some more.

So far very happy. I've not found the voucher yet, I'll have to drop them a line. All this and the rugby world cup on the way too. Hurrah!

Posted by Old Trousers at 19:55 2 comments: Links to this post