I had a cup of coffee this morning and instead of looking out of the window or reading the paper I played a quick game of Salvo! by Minden Games.

Since seeing Marco Arnaudo's review of the game I picked up my copy of The Loss of the Bismarck by Graham Rhys-Jones and as a result developed a real urge to pit the Hood against the pocket battleship. 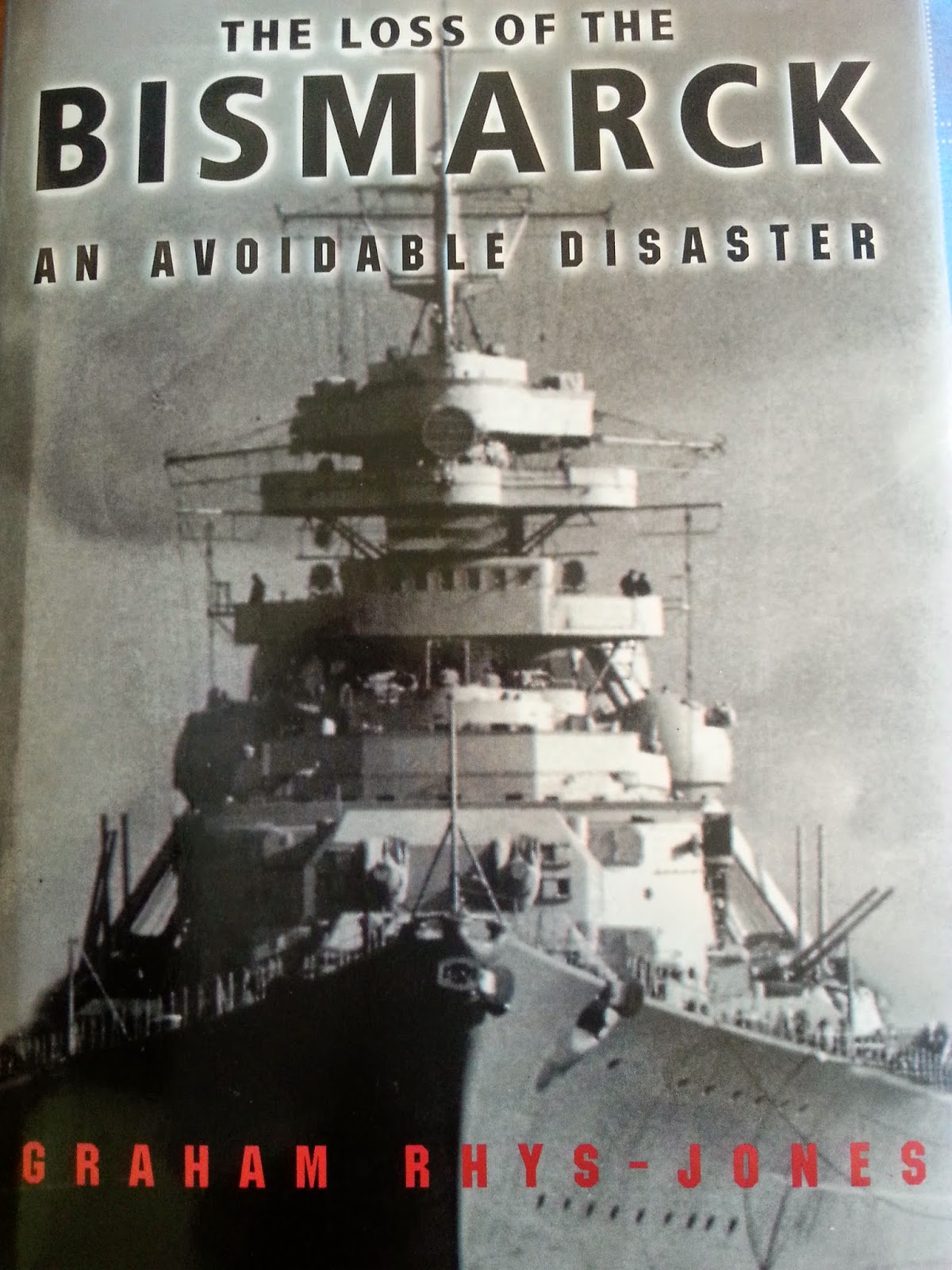 Salvo! is a neat little solitaire game by Gary Graber. I played it with the help of a nice player aid by Todd Sanders, available as a download from BGG.

In this picture we see the starting positions, Bismarck at the top happily minding its own business and Hood below is on the look out. The weather is fair and Hood detects Bismarck at long range.


In turn one, Hood closes the range but then finds that Bismarck turns towards her and closes down (oh dear!). Bismarck gets in the first shots, causing turret damage, but Hood has the better of it scoring flotation and speed hits.


Turn 2 sees Bismarck closing again, Hood offers broadside to get all batteries in position to fire. The exchange of fire sees further hits with Bismarck coming off slightly worse.

Turn 4 sees Bismarck withdraw, opening the range to medium. Hood gets in a final salvo, scoring two more hits. Bismarck fires her stern batteries, causing more damage to the Hood. At this point the end game die roll comes up and the Bismarck makes its escape.

A good little game with lots of flavour. It probably took half an hour (because I'm slow on the maths) but I actually enjoyed the contest. At the end, Bismarck suffered 8 hits and Hood 7. Still plenty of stamina left in both vessels for a longer fight but a rational outcome for a heavy unit contest.

Since my last mention of Salvo! I have come across the latest version (v2 2013) which comes as part of Panzershreck 16, a free downloadable magazine from Minden Games.

Posted by Old Trousers at 14:14 No comments: Links to this post

Long long ago I started out to write a version of Stephen Simpson's 1745 rules for the campaigns of Montrose. They were called "Nil Medium Est" (No Middle Way). And here they are in all their hand written glory! 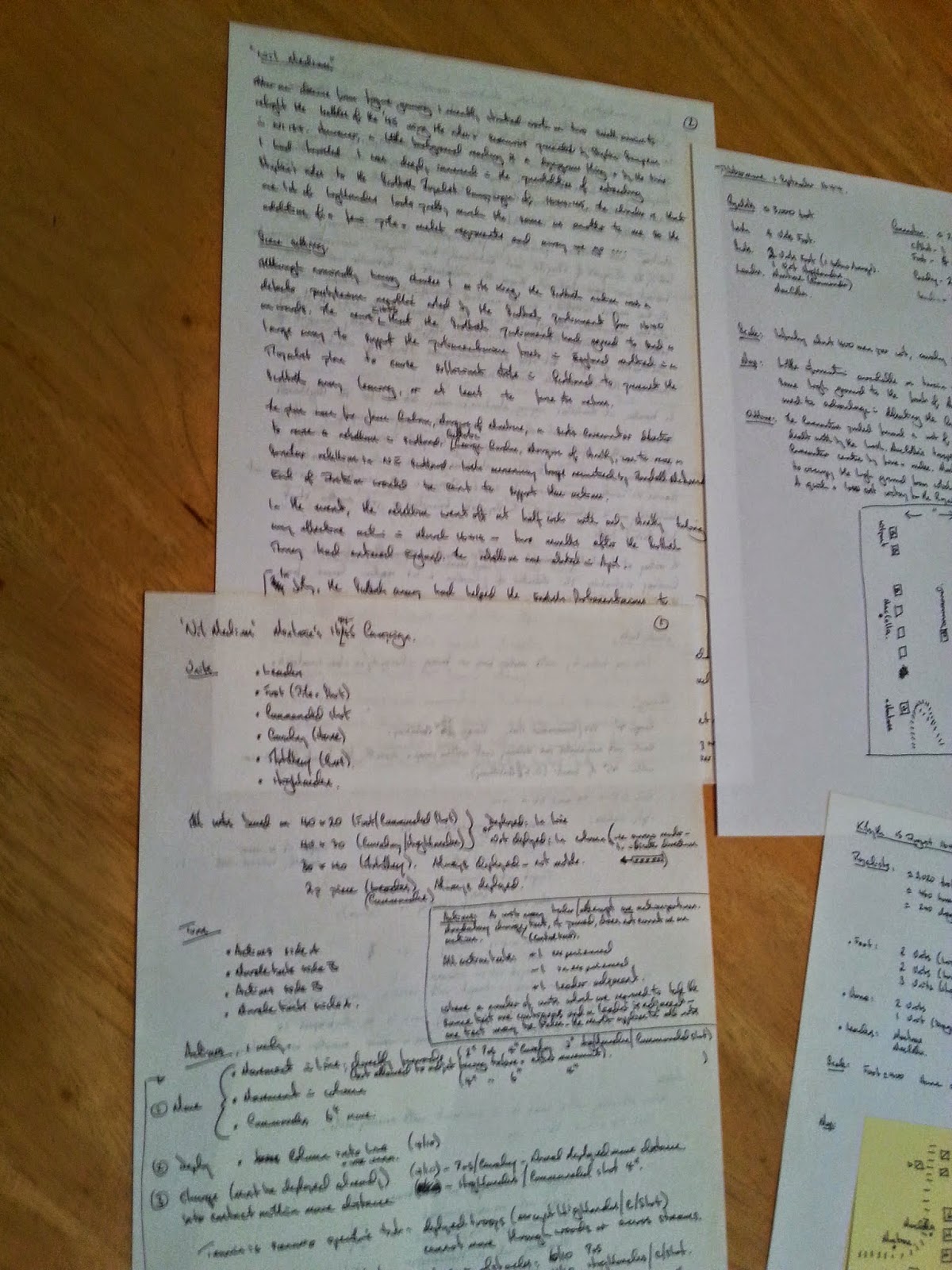 My main source was Auldearn by Stuart Reid (Campaign 123) and that remains the primary basis for the scenarios, see below. 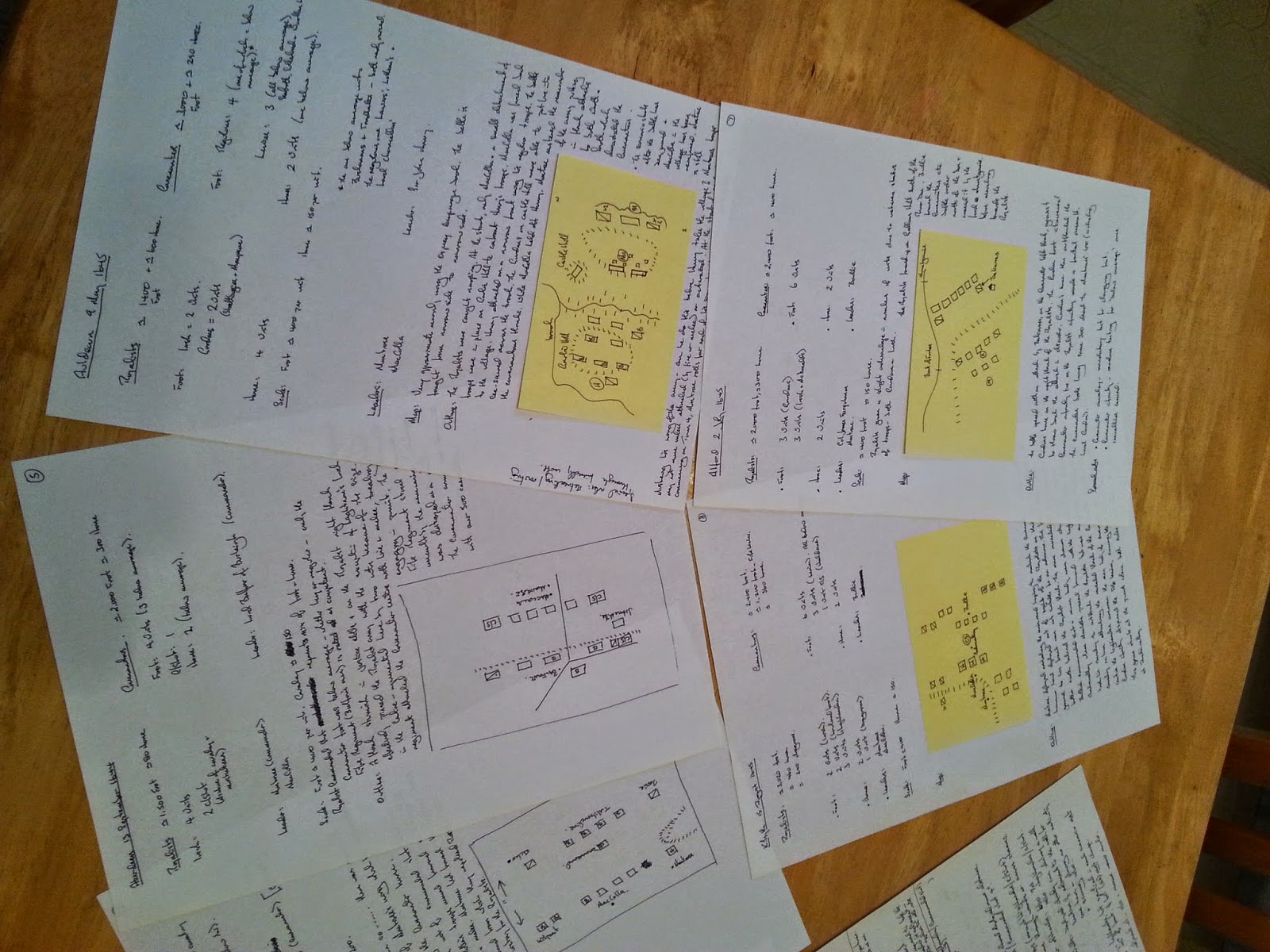 I have been frustrated with these rules for a long time because, although only two pages long, they still feel too complex. I also had a big problem with the maps and how to actually draw them.

I have taken some decisions and had a bright idea. Ideally the game will be played on a hex grid and use toy soldiers. At present my Baccus ECW troops are unpainted and hidden in the garage. Therefore this prototype uses counters. They also use a map, in this case, the M44 scenario editor has been used. The M44 editor does not produce really printable maps but for a prototype it is just the thing. Once the troops are sorted I could even play on the Hold the Line map using the HTL tiles.

One map herewith for the battle of Aberdeen. 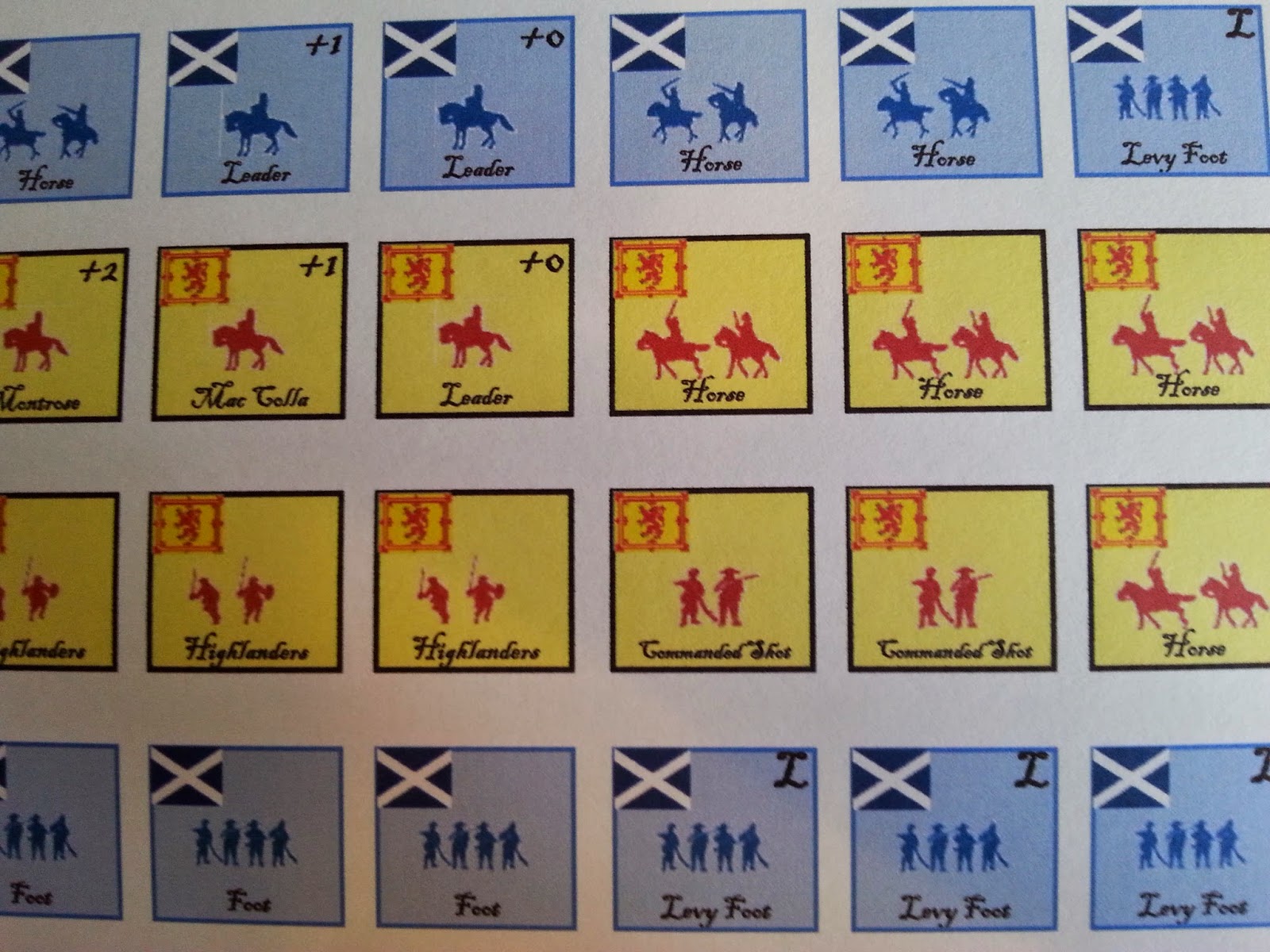 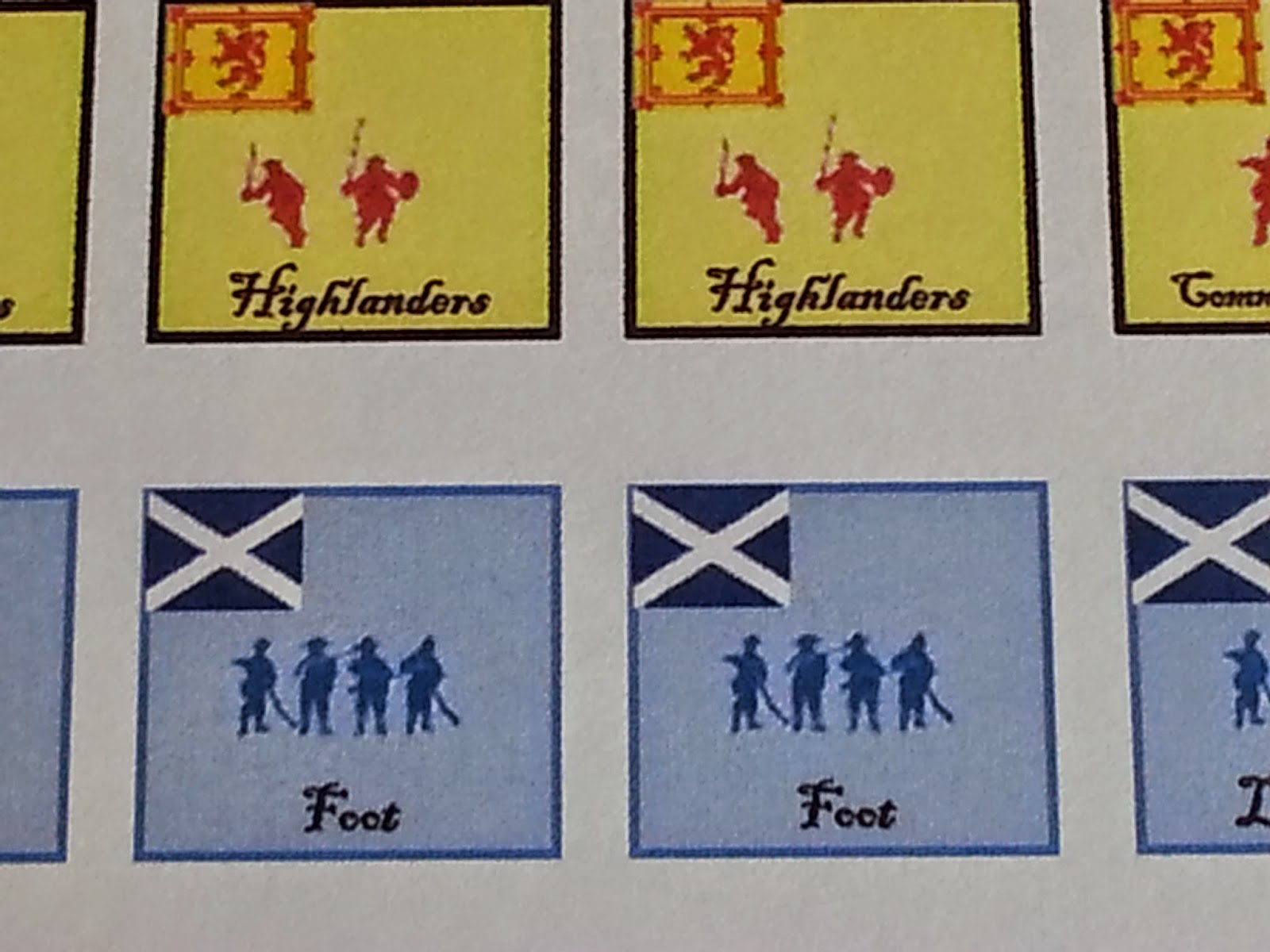 I'm quite pleased with these. Not good enough for a final print but good for a trial run. And last but not least, here is a test set up for Aberdeen. 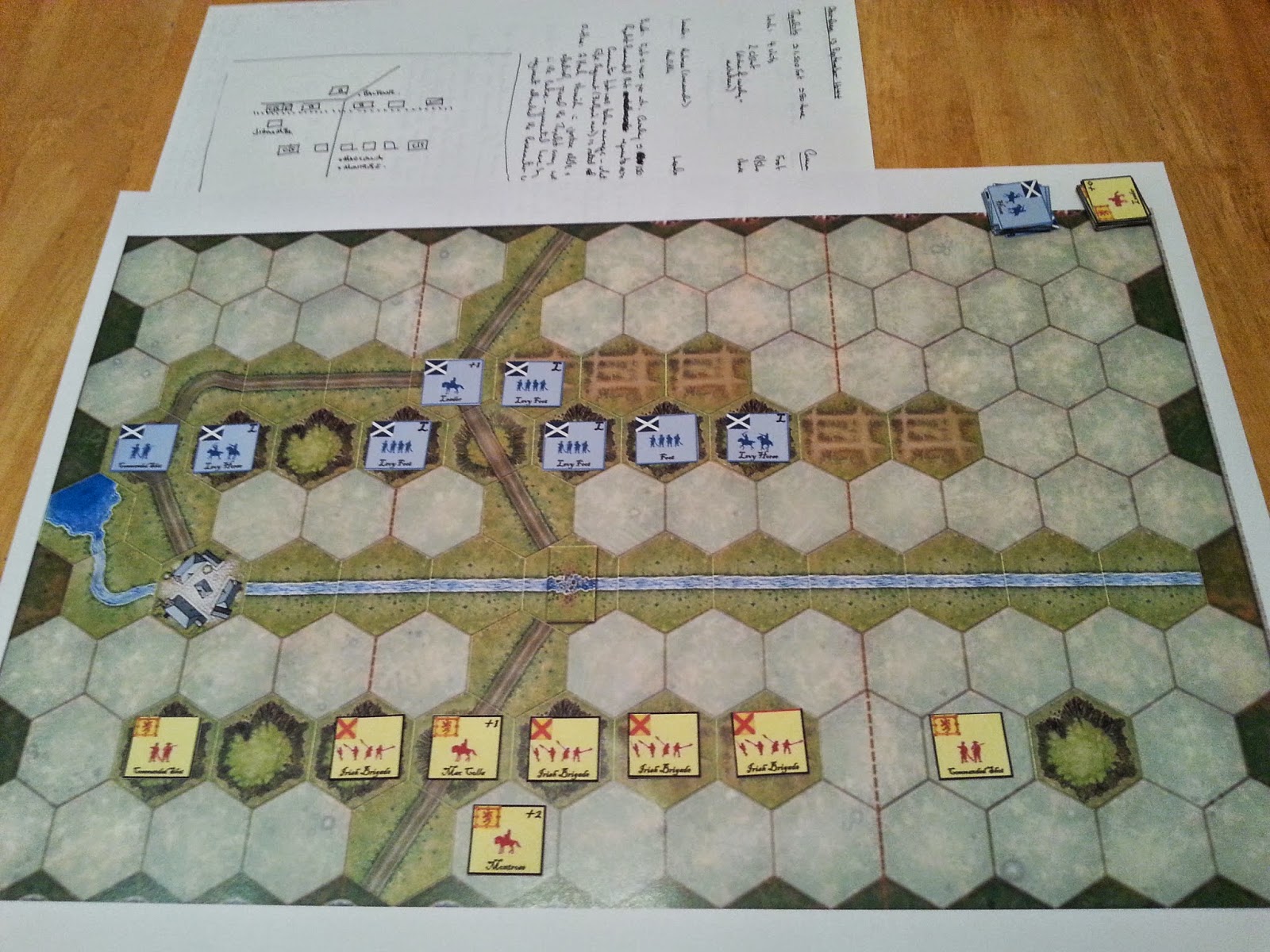 Now I can get down to designing some new rules. These will be called "Venture Fair" after Montrose's code name. Hurrah!

Posted by Old Trousers at 20:22 2 comments: Links to this post

Books: We don't make a big thing of Easter but my wife gave me a very interesting book, Crowns in the Gutter by Ted Raicer, published by Strategy and Tactics Press in the US. Ted is the expert on WW1 in terms of board games (Paths of Glory to name but one) and this book represents his analysis of the war as a whole, focusing on military operations. As you can see from the pictures, the book is very nicely produced and the format is very similar to the sort of articles you get in magazines like the now defunct Command. From what I have read so far this is very well written and very balanced. It is not just a collection of old articles. I wonder why this was never published in the UK? 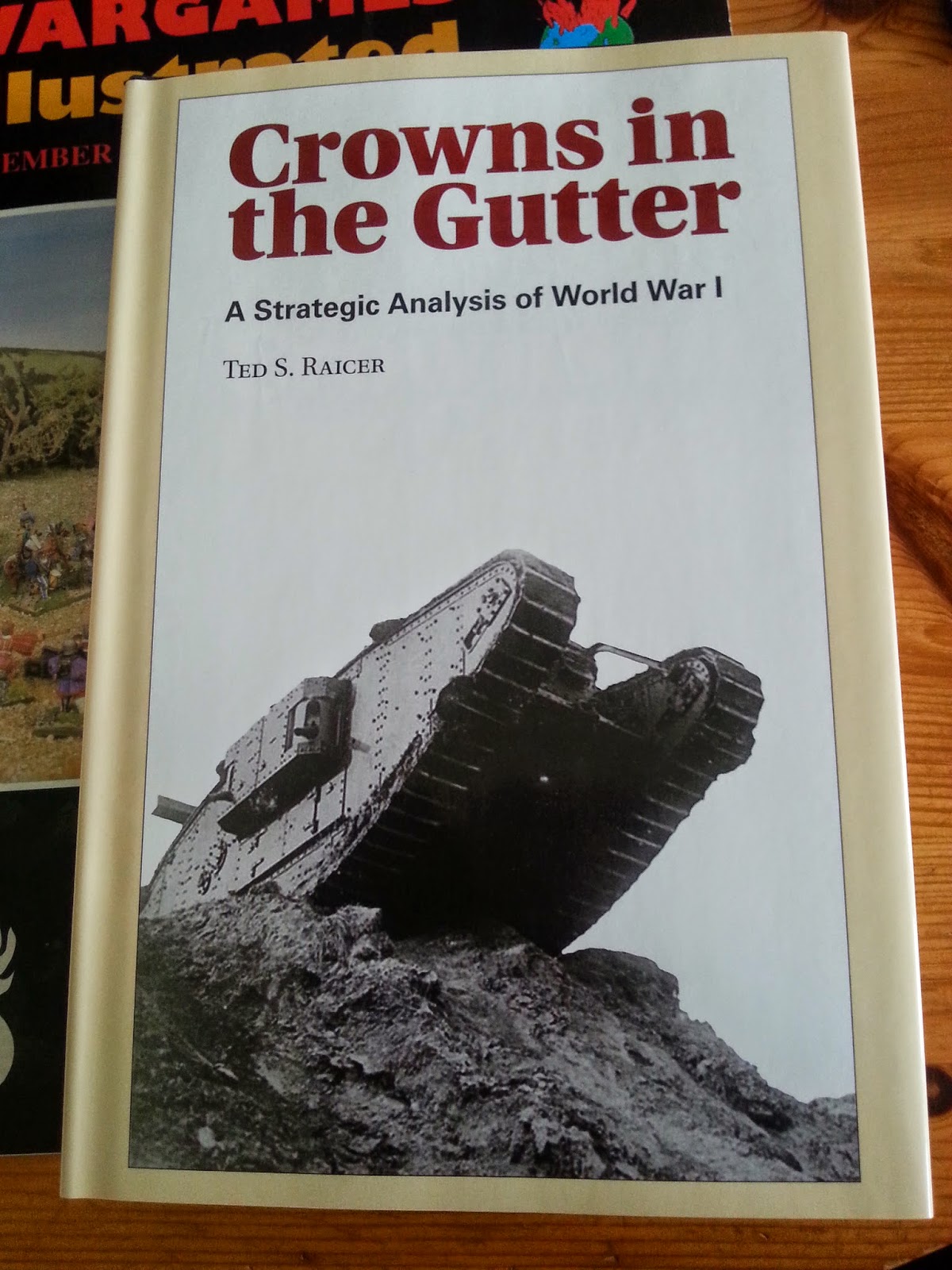 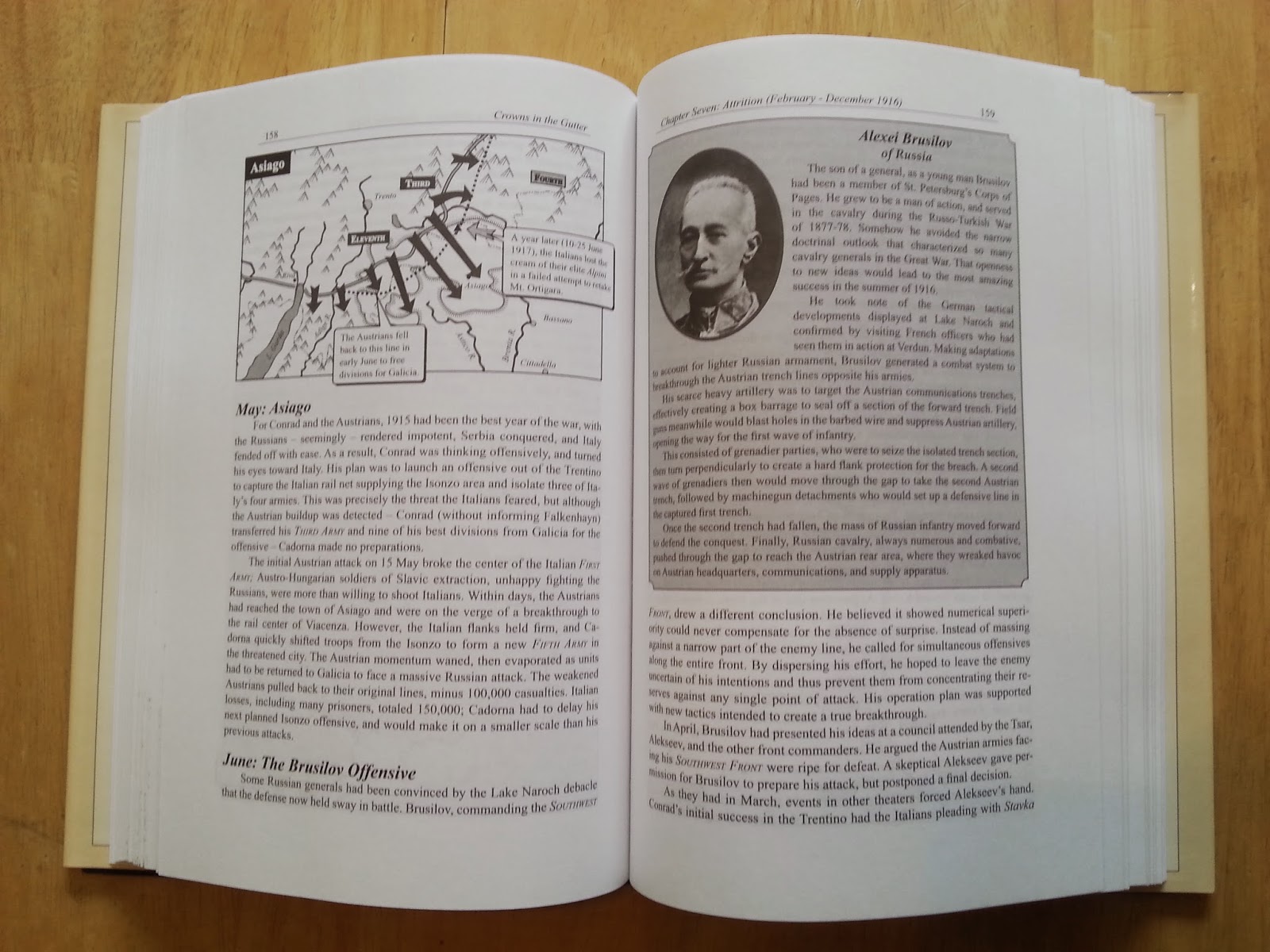 Salvo!: A tiny promotional solitaire naval wargame from Minden Games on a postcard. I have this and a slightly bigger version, Great War Salvo, free from the Minden Games website as an article in Dispatches Magazine. 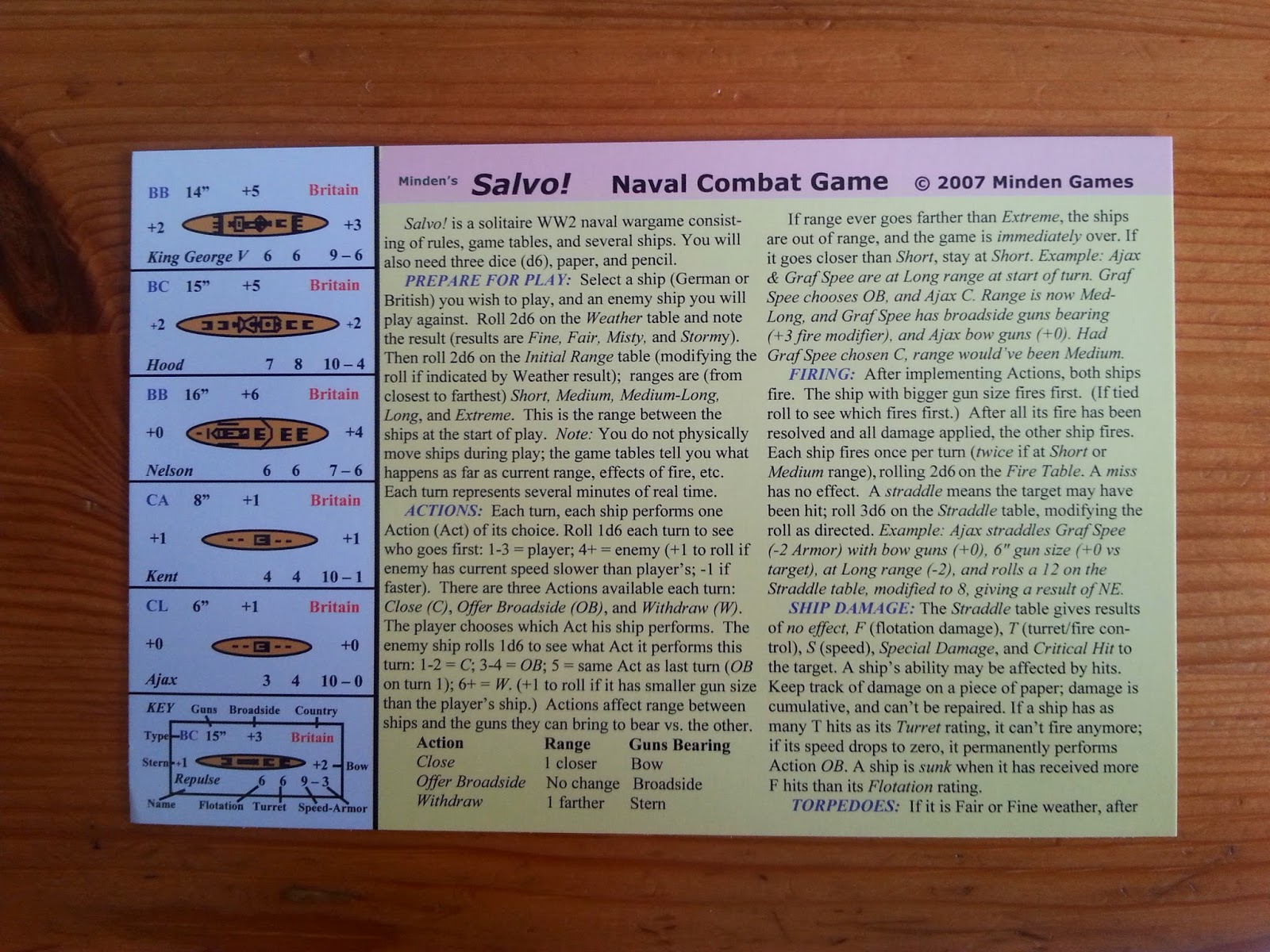 This afternoon I shall be playing this with my youngest son as my executive officer. I have been incentivised by Marco Arnaudo who reviewed Salvo recently on his You Tube channel, well worth watching.

Birds: Oh yes the feathery ones. I'm happy to report not only a Robin's nest in the garden but the close presence of four or more Goldfinches. if you haven't seen one of these they look very tropical! 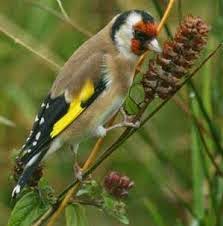 Posted by Old Trousers at 14:04 No comments: Links to this post

Yes, that's me alright, plenty of disorganised action over the past week, unexpected family activity of all sorts. Nevertheless, still surprisingly interesting from a wargaming point of view. Not so much a blog post as a list of stuff that has occurred!

1. PSC Universal Carriers: These little guys have been sitting in the study since Derby last autumn. Spurred on by the completion of the Shermans they are now ready for painting. 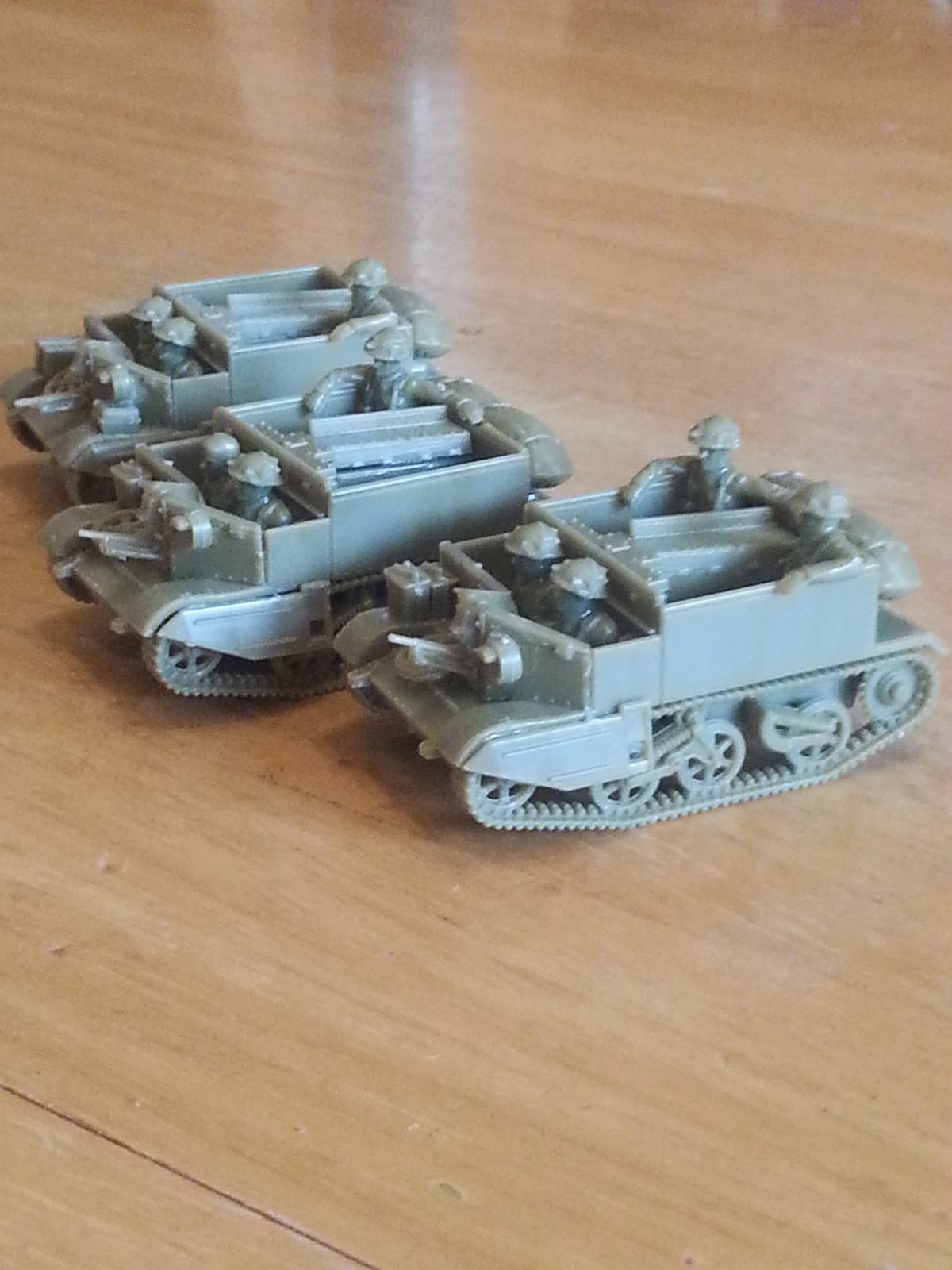 2. An actual excursion: To the West Midlands Air Museum. A lovely place with a Vulcan and other bits and pieces including this Mi 24. No opportunity to sit in the pilot's seat this time round but still a cool looking weapon. 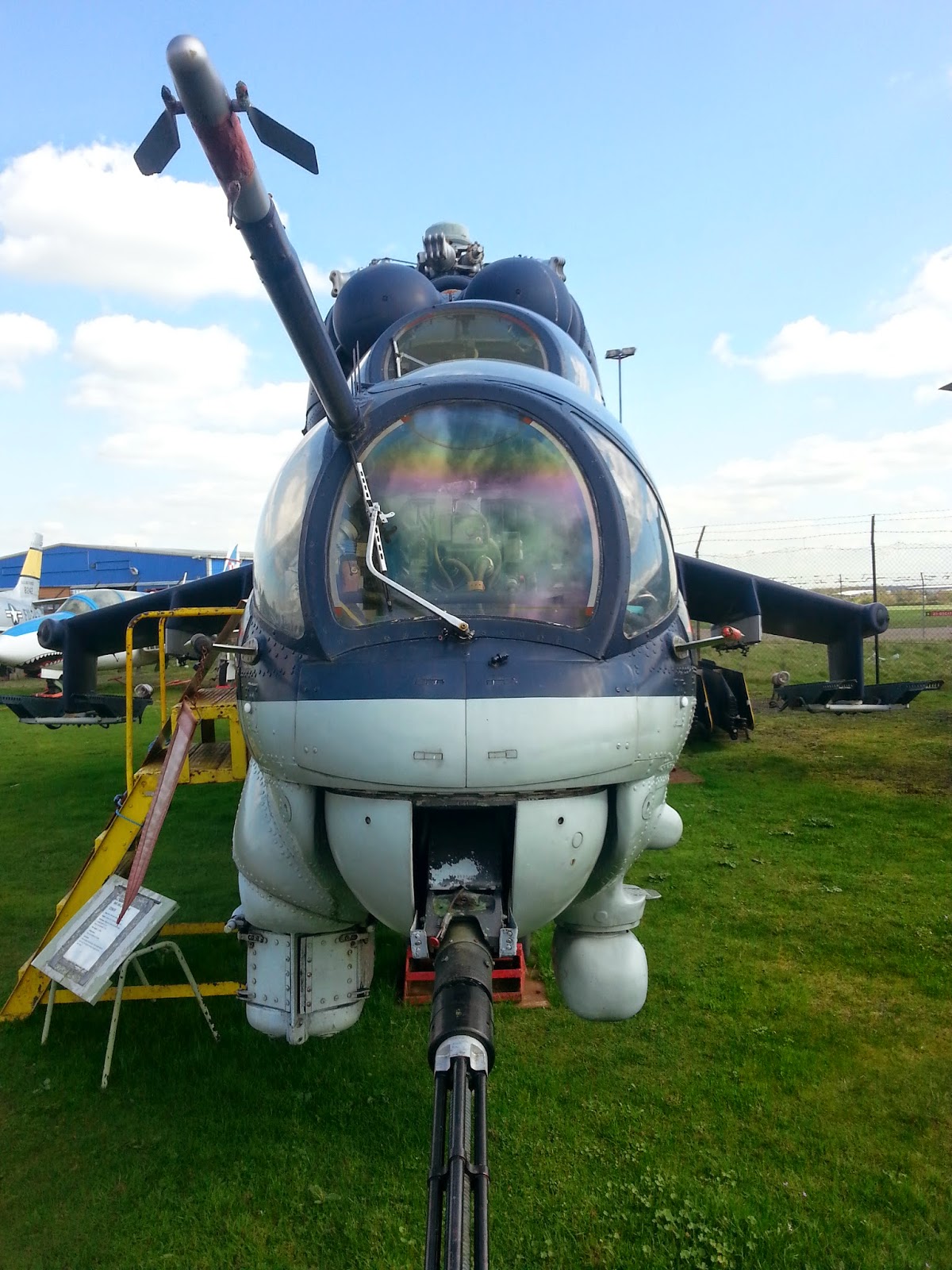 3. Wurttembergers: Honest, one minute they were on the shelf next minute I'd paid for them. Whoops. Nice trip to Joto Hobbies in Rugby. These lads will come in very useful in future (oh yes they will). 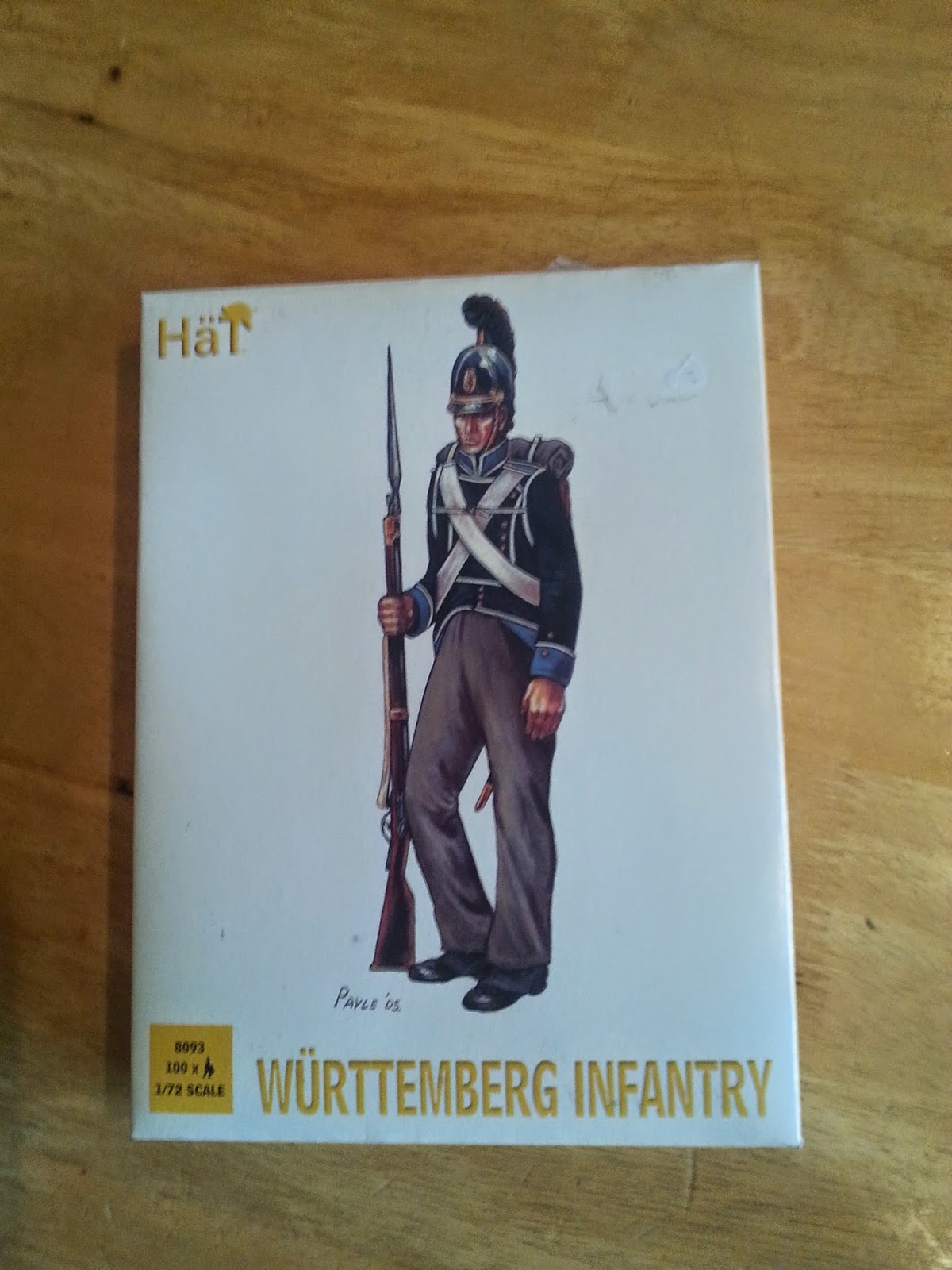 4. Twilight of the Sun King by Andrew Colby and Steve Thomas: A set of rules from the Pike and Shot Society. Now ordered as a result of some thinking about rules by Steven Simpson on which these are based. Looking forward to getting these over Easter (hopefully).

5. Firestorm Norway: This cheered me up, due out this Thursday on the Flames of War site. I've always thought that Firestorm offers some really interesting gaming possibilities and its nice to know that we have another installment, this time Norway 1940. 6. Song of Drums and Shakos: After reading the interview with Andrea Sfiligoi in the latest edition of WSS I was tempted to put his latest rules, "A Fistful of Kung Fu", on my shopping list. Diverted recently by Board Game Geek I rediscovered this earlier work on Napoleonic skirmish by Andrea's company, Ganesha Games. Now joined by a supplement and a large battles version. Hmmm, this might be a job for the Wurttembergers!

7. Two Buck Games: I have bought their latest War of 1812 Battle Pack along with their AWI Southern Campaign Battle Pack. By my reckoning this is 21 small board games for less than $10. Can't be bad. Something for the holidays!

Posted by Old Trousers at 20:21 No comments: Links to this post

I have now completed my long awaited British Shermans. I am now the proud owner of two Sherman IICs and four Sherman Vs.


This is a real mix and match between the Plastic Soldier Company M4A4s and their M4A2s. Some added SHQ tankies.
Funnily enough I have a can of British Bronze Green so we may have some paint action soon!
Posted by Old Trousers at 20:04 No comments: Links to this post

When you are having fun!

I have just realised that this little blog has been going for a year. I must admit, I am very surprised. As you can tell from the subjects of the posts, my interests gently morph as time goes by so the fact that I am still here and enjoying this is really cool.

This post makes 45 over the twelve months so not quite one a week but not far off. I didn't set myself a target but this feels about right to me. My blogging activities and my hobby activities are completely interlinked so I can't do both simultaneously. Neither can one exist without the other. One a week is fine, but gaps do occur when real life barges in, especially periods of very heavy workloads like I'm experiencing at the year end.

It has been a real insight to see what I have been doing over the year. I have done some pretty constructive things, making model aircraft and tanks (I know, I am still working on the Shermans), doing some thinking about military power (amateurishly) and documenting my most ambitious project about Tannenburg. All in all, a pretty good year..

Areas of interest for next year? Just glancing round the tip that is my study I see...

And on that note, I can't wait!

Thanks to those of you who have read my blog over the year. I'd be interested if you have any comments on what I have been doing. Nice also to have a follower... thanks all.
Posted by Old Trousers at 20:15 2 comments: Links to this post

and I'm gonna use it!

Starting with the Germans I have built up an initial picture of the units involved. This has come from a variety of sources including the Nafziger Collection but also the appendices to the Golovine book, The Russian Campaign of 1914.


The Golovine appendices are great because they give numbers of battalions, squadrons and batteries. This gives a real sense of the components of the German army. I must admit that I wasn't expecting to feel any romance in this story but there is something about the thought of the German fortress troops leaving their positions to reinforce the field army that strikes a cord. In some ways it feels almost medieval.

The data in the book seems OK, having checked against my other sources. Golovine makes some interesting points about how the Russian troops were outgunned by the Germans. He makes an argument that German troop superiority was 3:2, largely because of German heavy artillery. This is part of a sequence of arguments that he puts which are intended to give the impression that the Russians on the East Prussian front were not especially superior to the Germans. Norman Stone in his book "The Eastern front" has a good go at demolishing these arguments.

Hey ho, I'm designing a game and not solving the mysteries of the universe so my design assumptions are:

My first go at preparing OBs and combat factors for German 8th Army and Russian 1st Army are shown here: 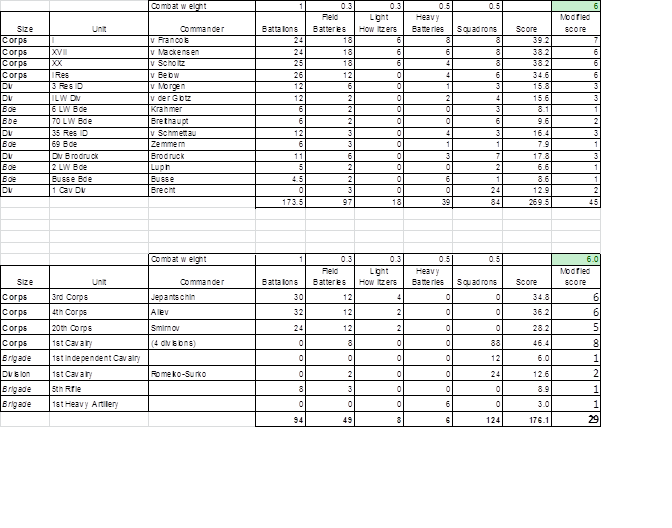 I have used the same combat weightings as shown at the tops of the columns for both armies. Obviously the whole of the German 8th Army is not going to deploy against the Russian 1st, but it has sufficient combat power (weight) to be able to take them on at equal strength. I'm interested that I have not had to apply a different divisor to the Russian numbers, the disparity in strength coming partly from their lack of heavy artillery, one of the points made by Golovine. They also lack infantry but have lots of cavalry. I'm worried that the Russian cavalry "corps" is too strong, this contains four divisions. I'll need to think up a different approach, perhaps applying a different factor to the Russian squadrons.

Next steps are to research Russian 2nd Army and then to examine the reinforcements. Hopefully I'll have some time over Easter to do this.

Posted by Old Trousers at 19:31 No comments: Links to this post