Hold the Line: lead the way

He wasn't called Butcher for nothing. The Duke of Cumberland, a competent leader and inventor of the famous sausage.


Leaders in HTL are very important. Apart from the use of the commanders' capability to save APs for the next turn, leaders will:

They are also resilient. If alone in a hex that is entered by an enemy unit they are displaced to the nearest friendly unit. Likewise if they are in a hex with a friendly unit subsequently destroyed in combat. If accompanying a friendly unit that is forced to retreat, they follow the retreating unit. However, there is a chance that leaders will be killed in both fire and close combat if any "ones" are thrown in the combat. If you lose a leader it costs you 1 VP.


In the five Highland Charge scenarios there are one, two or three leaders with values of either 1 or 2. Good commanders rated 2 include Argyll, Rob Roy, Murray and Munro. Despite his achievements, Cumberland rates only a 1. Cheer for your favourites!


Analysis: In board game terms none of this is terribly new. In some ways it reminds me of the old SPI Thirty Years Quad. Not that that is a bad thing, quite the contrary. These are tried and tested mechanisms that allow a range of battlefield command issues to be modelled quite well.

Getting to grips with the rules for Highland Charge


I like this game so much I'm spending some time and effort getting properly into the rules. This is for two reasons

1. I think the rules are very good but they are written in a way that makes it hard for me to properly comprehend them. If I take them apart and re-assemble them I will fully understand them (imagine what I used to be like with complicated stuff?).

2. I have some plans for these rules. In particular, once I'm happy I understand Highland Charge I'm very tempted to use them to design scenarios for the battles of Montrose. I can't see any reason why they shouldn't work and may even then take them further and look a the rest of the ECW. The other idea that popped into my head recently was to use these rules for FPW or even WW1. The command limitations and slow movement rates would be particularly interesting for WW1.

So, lets take a look first at the command rules which are the motor of the game....

Action points: Each player has a number of leaders (up to three), one of whom is the overall side commander. Each scenario allocates a base number of APs per side. This varies from one (minimum) to three (maximum). Each player rolls a d3 and adds the score. This score is modified: -1 for each of the player's leaders that have been eliminated but +1 if the player's overall commander had a rest in the preceding turn (i.e. was not activated).

There is also an interesting option to save APs from one turn to the next. The limit on this is the commander's leadership rating. The commander must also still be alive when using these extra APs and they must be used in the turn immediately after they have been saved.

What does all this mean? Well, in the scenarios in the Highland Charge book, the maximum number of APs that might be used in a turn is eight! That is, 3 scenario APs plus maximum 3 on the d3. No leaders eliminated and army commander rested on previous turn (+1). Add +2 APs carried forward (the maximum is 2 as that is the highest commander rating, given to Argyll in Sheriffmuir). That makes 9 but as Argyll's scenario points are 2, the maximum that can be scored is eight.

Analysis: Unlike PIP type games, there is some skill in managing your APs. It is possible to build up to a large scale winning attack. There is still some luck, but this is perhaps less decisive than some of the issues with CnC card driven games which can leave you in a pickle. 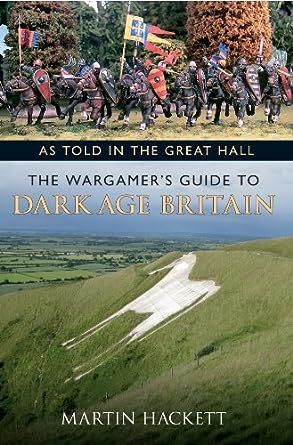 No, not that kind of shopping

Another really tough couple of weeks at work and my energy for doing anything is pretty much shot. I have been idly thinking through what my shopping list might be for Christmas. That is, of course, the list of things I intend to buy for myself. Not that I'm selfish, I'll shop for others first but there is no way that I'm waking up on Christmas day without knowing that I have an interesting parcel to open. If in doubt, buy your own!

I'm happily compiling a little list of HTL kit. I think Napoleon at War: The 100 days followed by Gettysburg 150 (if that's out by then) or maybe the FIW expansion. As I would feel guilty spending that sort of money full stop, let alone on myself, that may be pushing it. However, I have found a list from a while ago of old Vae Victis magazines that I might like to catch-up on. So here is my list (all of which I think I can get from Vae Victis in France).

A small but interesting looking game of Bull Run (VV89).

Four battles from the ninth century using the "A la charge" rules (VV100).

That's 12 games in all, just right for the twelve days of Christmas, now that's an idea!!!
Posted by Old Trousers at 20:28

Battle of the magazines

Sifting the wheat from the chaff


Well, its that time of the month when I find I have spent money on magazines again. Its some money too, not just a bit of loose change. Therefore time to take stock of these purchases and not a bad month in which to carry out such a review. I shall define my criteria at the end! 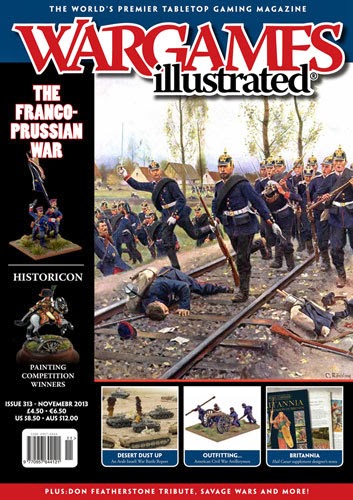 Wargames Illustrated (313): 120pp £4.50 FPW themed with some interesting stuff on St Privat and Worth. Designer notes on the Britannia supplement for Hail Caesar (which looks really good). Lots of pictures and lots of FoW. As I don't play FoW (although I really like their Firestorm Campaign system) this really isn't one for me. I do feel very connected with this magazine having been buying it since 1987. I bought the first edition at Liverpool St station from W H Smiths and read it on the train home. However, that's several divorces ago so time perhaps for a change. 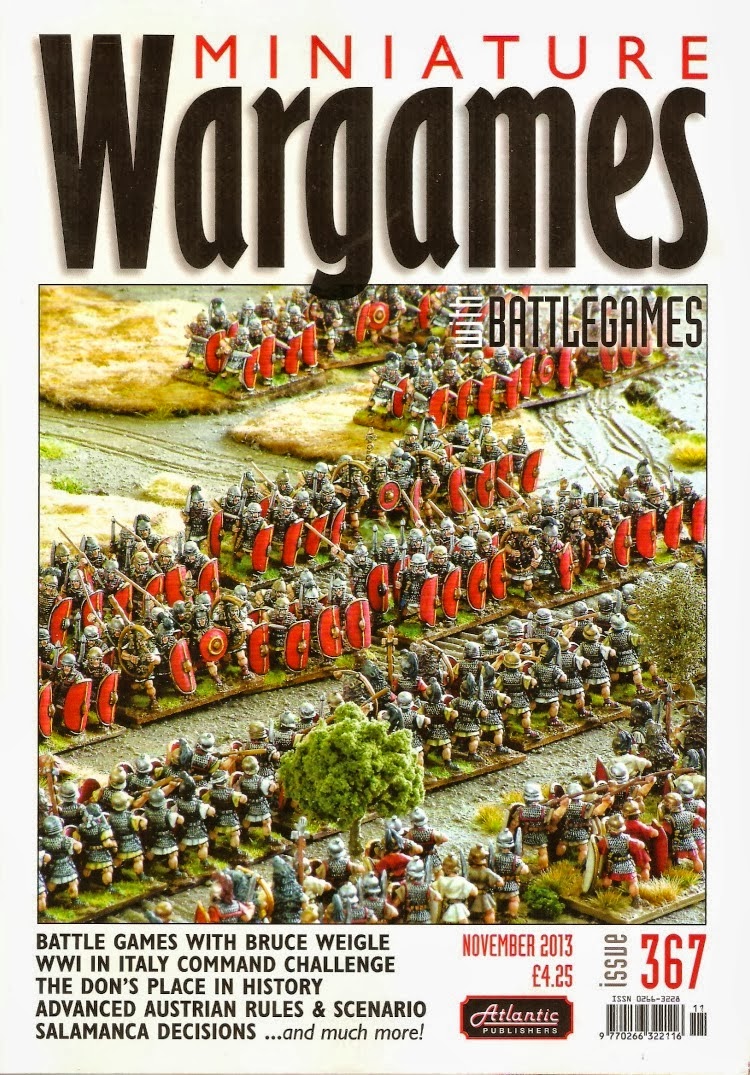 Miniature Wargames with Battlegames (367): 76pp £4.25. I loved Battlegames and for me this does not provide an equivalent substitute. However, leaving aside quite a lot of chat type articles, this magazine does provide some great stuff this month. The second part of Wiener Planspielregeln which features a Mortain scenario and more pictures of battlefields with squares. Brilliant. Also, "An onslaught of spears" by Jeffrey James which features the use of "Middle Age Spread" rules for the Danish/Saxon battles immediately pre-Norman invasion. Great and inspirational. This has had me looking up old issues of the Nugget and rummaging in the garage.Top stuff indeed. 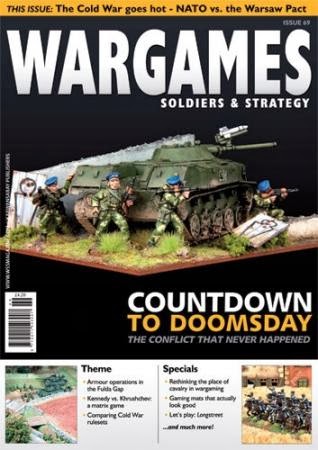 Wargames Soldiers and Strategy (69): 82pp £4.20. Smell the quality of the paper. This is what Battlegames used to smell like (choose from napalm, victory or teen spirit). A cold war themed issue complete with matrix game of the Cuba crisis and lots of pictures of Soviet tanks. I don't always get the theme in WSS but this one is up my street with contributions from people who really know their stuff. Also good reviews of Longstreet and Gods and Mortals. The best bit is an article on French Napoleonic cavalry, "Sabre in hand", which breathes new life into the stale arena of Napoleonics.

Well, what's the criteria? I can always tell my favourite magazines, they are inevitably crammed with bits of paper, floppy from continued handling and (for someone who has OCD like needs to keep stuff neat) some pretty fearsome finger marks!  This weeks winner is MWWB and, based on previous issues, it continues to be in the forefront because it is inspirational.
Posted by Old Trousers at 20:36