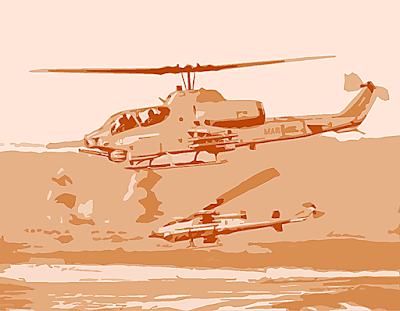 Today I have mainly been thinking about rotary wing close air support (RW CAS). To you and me that's choppers! Here are the first thoughts.....

A helicopter may be subject to anti-aircraft fire as opportunity fire from enemy units in Overwatch in any hex that it starts in, passes through or ends its move action in. A helicopter that does not move at least three hexes in a move action becomes a sitting target and enemy units firing receive a fire bonus when firing at it.

Helicopters ignore terrain restrictions. They may only land in clear hexes that contain no vehicles (or wrecks).

Special actions available to helicopters include: Landing, taking off, embarking or disembarking passengers (this includes allowing passengers to disembark by rappelling) and lasing targets for air strikes. 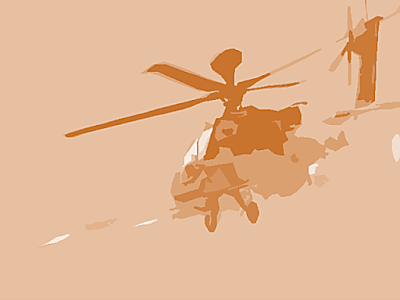 Next problem to solve is that helicopters don't roam around shooting stuff up for fun. The air response must be proportionate and avoid collateral damage (as well as friendly fire) and enemy anti-air assets. That's the job of the JTAC who must have eyes on target, at least for a type 1 weapons delivery (visual contact with both target and A/C). How do we represent the JTAC and their interaction with the CAS? I have a few thoughts, they make for good scenarios!

Very nice!
Good that you're starting with things like the JTAC when thinking about the rules. So essential (I guess) in reality, yet rarely (never?) reflected in game rules.

Look forward to what rules you devise to limit targets for the choppers. The challenge will be how to minimise the number of rule caveats which may arise.

Love this! The continuing wars in Iraq and the Stan have given us more experiences with RW CAS than i ever imagined as a cadet. In addition to JTACs, an important distinction is that regular, professional platoon leaders and fire support teams are well versed in the CAS call for fire and adjustment. (though admittedly no one does it better than a JTAC). I got to do this more than a few times in my former career.

I would LOVE to help playtest!!

I don't really know much about post WWII - can choppers go into overwatch?

Thanks again for your comments. Nice to see there is someone who knows what this is like in real life!

1. There may need to be rules to allow special forces and other troop types to call in CAS, but this might be scenario specific. My feeling is that US air support for, say, Iraqi forces or Kurds, would be called in by a Coalition JTAC.

2. I'm pondering the effects of strikes that are not on target, it may be as simple as scoring negative victory points for misses (and potential civilian casualties).

3. If this was a 1985 Cold War in Europe then we would need rules for pop-up helicopter ambushes (a sort of overwatch). In the Mid East, terrain (it's quite flat) and dust (it shows your position) would not encourage stationary helicopter tactics. There may be room for helicopters circling and watching a target area. This is implicit in the need for helicopters to circle if they want to stay on the board.

4. Part of the flavour of tactical situations envisaged in the game is that some units have very specific capabilities: snipers, helicopters etc. I'm trying to tie the differences in closely to simple mechanics for special action rolls. I hate having loads of exceptions!

I have some spare time over the next few weeks so watch out for a play test set of rules around mid-August.

Jay, just comeback from a friends and he has a hefty boxed game called Urban Operations (I think published by NUTS), but it looks like it contains everything that you could wish for.

There is a lot in there and it is a block game, so I don't know about solitaire value, though he said there is a specific solitaire scenario in there. There is tons of stuff in the box and he thought that the rules looked meatier than the 'simple' type score that was on the back of the box.

Anyway, certainly worth an investigation on your part. I like spending your money.

I'm jealous! Urban Ops is on my list and looks really good. The maps are fantastic as is the range of scenarios.I think GZ will look at bit home made compared with Urban Ops....

Feel free to spend my money any time you like!