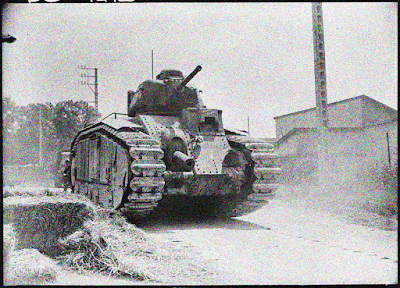 Bonjour, the above pic is a clue to current lines of thinking. France 1940 in fact.

I have been going round in circles with some ideas about bringing Simplicity in Practice into the 20th century. Unfortunately, I started at the very difficult end (Cold War). Not that I have given up on that subject area. In fact I intend to return to it shortly using a bigger map and more units than in the OHW scenarios I have been using for Simplicity.

Dropping down the complexity levels I have arrived in 1940 France. Interesting tanks (Char B1 bis in fact), great texture and difference between units (French Colonials, Foreign Legion etc) and opposing sides that have individual characteristics which lend themselves to some game type exaggeration.


To ensure this is really brutally simple we will be using crude measures for combat statistics:
Lots to do but I'm hoping it will give a good game with some historical flavour.

Email ThisBlogThis!Share to TwitterShare to FacebookShare to Pinterest
Labels: 1940, Simplicity in Practice

Very interesting. Piqued of course by the Cold War version on 6x6.
Will follow with great interest.